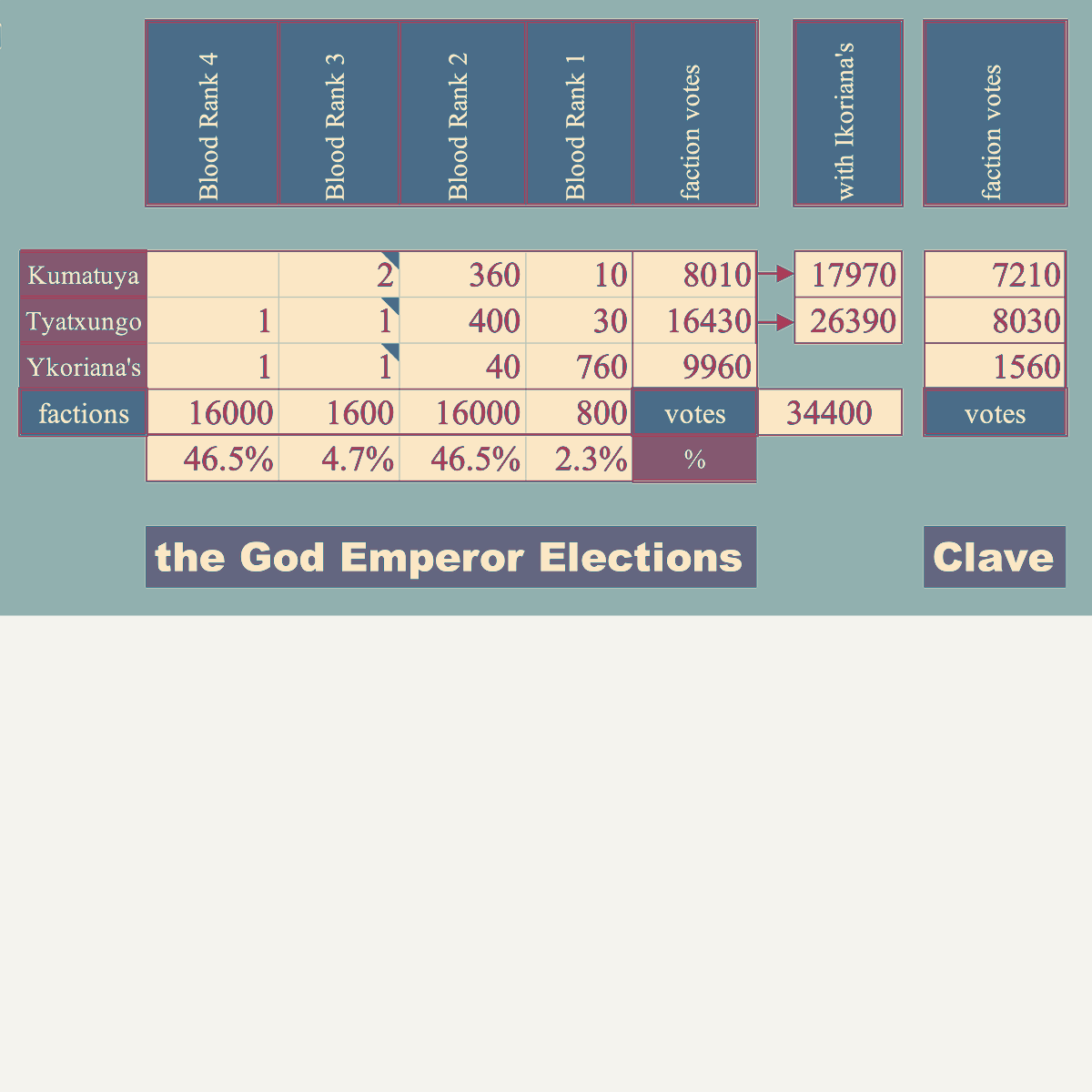 Voting processes are ubiquitous among the Chosen and are based on blood-rank. Only those who are of the Great are ‘enfranchised’ and, of these, women and minors are generally excluded. (In this case, the House of the Masks is to be considered to be of the Great.) Among the Lesser Chosen, voting systems do occur for votes carried out within their Houses, but these use methods not based on blood-rank.

Votes, then, are cast according to blood-rank and rise by factors of twenty in accordance with the purity of blood of the voter. Thus, a voter of blood-rank 1 casts a single vote; blood-rank 2 casts 20 votes; blood-rank 3 casts 400 votes and blood-rank 4 casts 8000. The latter two voters exist, except extremely rarely, only within the House of the Masks. He-who-goes-before is an exception, being able to cast 400 votes (on top of the ones he can cast in his own right) indicate that the holder of that post is, nominally, assigned a blood-rank of 3.

A woman’s votes are generally cast by the Ruling Lord of her House. This is also the case for minors – that is, girls, and boys not yet having received their blood-rings. This casting of votes by a Ruling Lord is called a Block Vote. Women of the House of the Masks can cast their own votes and, sometimes, also women of some eccentric Houses of the Great; but, in both cases, these votes can only be cast in ballots within a woman’s own House.

Specific circumstances in which votes can be cast are:

– conclaves: which are convened by a group of the Great with a view to determining a particular course of action. Block Votes cannot be cast here.

– in the Clave: here only Ruling Lords of the Great can vote and, when they do so, they cast a Block Vote for their whole House. Lords of the House of the Masks are not entitled to vote within the Clave.

– House internal ballots: these are carried out according to the rules of that House; however these rules may diverge from the norm, they will certainly favour a House’s first lineage.

– Imperial Elections: this is a ballot carried out in the Chamber of the Three Lands to elect a new God Emperor and is related to, and a special case of, the process by which a Ruling Lord is elected within a House of the Great.

This ballot to elect a God Emperor does have some peculiar characteristics:

– that the Great are entitled to vote: not only the Ruling Lords casting their Block Votes, but also the independent males of their Houses.

– that the women of the House of the Masks are entitled to vote as they will.