The Chamber of the Three Lands is a cave lying at the heart of the Halls of Thunder where the Chosen gather to elect a new God Emperor. The interior of this chamber is described in great detail in the chapter of The Chosen, “The Election”. The diagram shows an end elevation (showing the position of the immense stone bell) of the Chamber with a plan superimposed. In the plan, it can be seen that […] 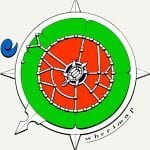 A wheelmap is a symbolic representation of the Three Lands: the Black Land of Osrakum, the Red or Guarded Land, and the Green Lands of the barbarians. The diagram shows a wheelmap as a compass rose aligned to the south west, from where the Rains come. The system of raised roads is shown, with all the cities and with a ‘sea-wave-curl’ glyph indicating the sea lying to the north west.