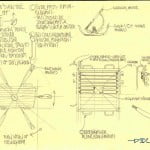 Each of the watchtowers that march alongside the roads of the Guarded Land is provided with a heliograph. This is a complex device consisting of a louvred panel of mirrored strips that can be angled and rotated to catch the rays of the sun so as to send messages to a neighbouring tower. Operated by the ammonites who staff each tower, messages can thus be jumped from one tower to the next, permitting back and […]

When the new Halls of Thunder were constructed, the Wise continued to use the chambers they had used in the ancient halls. The diagram here shows the location of the Library of the Wise, the positioning of the ammonite arrays, as well as the chamber that is the terminus of the heliograph system providing the Wise with a direct link to every watchtower in the Guarded Land and every legionary fortress.

Watchtowers are set at regular intervals along the raised roads of the Guarded Land. They form not only the primary communications systems of the Commonwealth, but also provide the Wise with a ‘sensory grid’ with which they ‘see’ much of what goes on in the Guarded Land. In addition, each tower is garrisoned with enough auxiliaries to defend the gate over which each tower stands guard. The communication system has two distinct aspects. Messages can […]