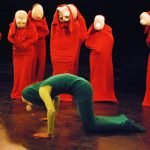 Dramatic performances ask of their audience that they suspend their disbelief. An aspect of this can be that we are asked to believe that actors, mostly unrelated, are actually blood relations. Film and TV close ups make this more of an issue. How long will it be before computer post production allows actors, that are supposed to be blood relatives, to have their faces digitally modified by means of an inbetweening algorithm so that they […] 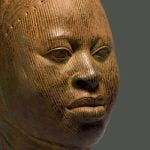 Responding to Rem’s request, here is an image of one of the heads of Ife currently in a show at the British Museum. For anyone who’s read the Stone Dance, it will be obvious why these would appeal to me. Exquisite works of art, these could easily be the pattern for the masks of the Masters. What is rather darkly amusing is that, when they were discovered, it was decided that these sculptures, as well […]

In the Stone Dance masks are a major trope or symbol. They emerged from my unconscious for reasons that I did not at the time understand. I am not sure I fully understand them even now. Suffice it to say that in the Stone Dance there are many more kinds of masks than those the Masters wear.