The Plain of Thrones is a smaller volcanic crater located on the Isle lying in the midst of the Skymere in Osrakum. This name comes from the tier of thrones set into a hollow in the south-western wall, where the Chosen gather to witness the homage of the tributaries on the plain below during the ceremony of the Rebirth. It is here that the Apotheosis of a new God Emperor is held. The plan shows the […] 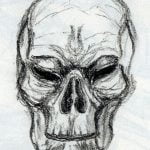 The Wise are the third Power of the Great Balance. It is they who administer the Commonwealth as well as enforcing the statutes of the Law-that-must-be-obeyed. Their power is obtained at the cost of terrible mutilations: “They are in our world only by their skin. When they have achieved the highest wisdom allowed to those with eyes and ears, they are locked away. Eyes are sliced out, like a stone from a peach. The red […]