The term ‘dragon’ is one commonly used to refer to a ruhuimur of the legions—ruhuimurs form one arm of a legion, the other being its aquar mounted auxiliaries

A legion consists of two arms: the ruhuimur dragons and the auxiliaries; the auxiliaries are mounted on aquar and are recruited from among the barbarians surrounding that Guarded Land

The legions constitute the primary military power of the Masters. A legion consists of two arms: the dragon ruhuimur and the aquar-mounted auxiliaries. Apart from their Chosen commanders, legionaries consist of either marumaga or mercenaries recruited from among the barbarians. All recruits are forged into collars of brass that only the Chosen know how to remove

A Quaestor is appointed by the Wise to shadow a Legate. They are a sort of ambassador for the Wise, in post both to command all the ammonites who attend a Legate, to aid that Legate with all the technical knowledge of the Wise and to supervise that Legate and the legion he commands on behalf of the Wise. A Quaestor begins his career as an ammonite, and may well have been close to being …

A Legate is a military commander of a legion of Commonwealth, generally appointed from the Lesser Chosen by the God Emperor. During the term of his office, a Legate will reside with his legion at its base somewhere in the Commonwealth. Mostly this will be in one of the cities of the Guarded Land, though there is a Legate in Thuyakalrul who controls, instead of a legion, a fleet of barans 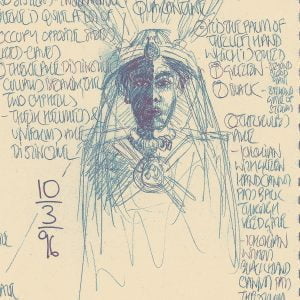 The Ichorians, or Bloodguard, are divided into Dextral or Red Ichorians and Sinistral Ichorians. Their purpose is to protect the pure blooded—they defend ichor: specifically the Great and the God Emperor and those of the House of the Masks 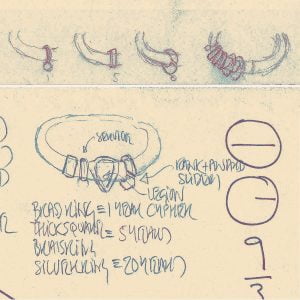 Collars forged from various metals and alloys are worn by all the various military personnel of the Commonwealth as a token of their service to the Masters and their God Emperor. Since metallurgy is a science that the Masters keep secret to themselves, only the Masters know how to remove them. Thus a service collar becomes a form of enslavement, since the Law of the Masters mandates that anyone found wearing one outwith their proper … 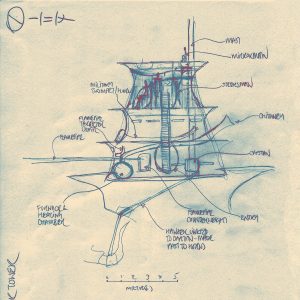 The first sketch shows a Master sitting in the command chair of a dragon tower. Before him is the lattice bone screen that he looks out through. On either side of him kneel his Righthand and Lefthand, with the tubes connected to their helmets that allow them to be talked to by other crew in various parts of the tower. At both lower corners of the drawing can be seen the ‘voice forks’ that the … 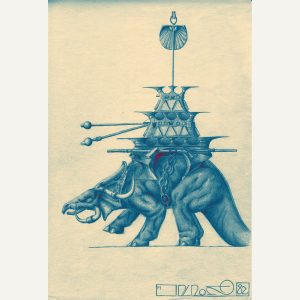 I drew the second and third drawings in 1982; they predate the writing of the Stone Dance by decades—showing just how long I had been brooding ideas for the books The first drawing shows the final form that a dragon and its tower took. The original image was produced in 1993, but was constantly modified during the writing of the First Edition of The Third God as I came to more fully understand how everything … 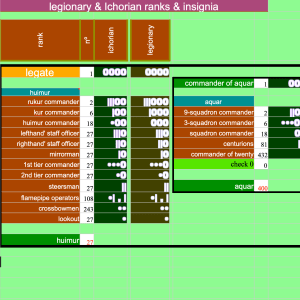 There are many categories of military personnel maintained by the Masters throughout the Commonwealth, but all of them wear metal service collars that carry sliders. One of the functions of these sliders is to indicate rank. The second diagram shows some of the work that culminated in the tables displayed in the first diagram. These tables show the ranks and insignia for the Ichorians, for legionaries and auxiliaries. Those displayed cover ruhuimur (or dragon) crews …