Ammonite arrays provide the Wise with the ‘computational’ resources they need to perform complex calculations—for example those that predict the arrival of the Rains in Osrakum. Ammonites seated in ‘arrays’, stretching up the walls of specially constructed cells, are used as computational elements, and are fed ‘programs’ by Sapients by means of their homunculi. These programs are run in parallel by many cells controlled by Sapients, the ‘computation’ being co-ordinated by arrays of Sapients of […]

Beadcord is the ‘braille’ system of the Wise. It is a form of ‘writing’ that allows the Wise to use their only sense—touch—to read and ‘write’ texts without using their homunculi as intermediaries. Beadcord consists of beads threaded in sequence on to a cord. The resulting cord can be woven into brocades, tapestries and wound on to reels to form books. The Library of the Wise consists of a large collection of these books that […]

The Wise are organized into 12 Domains—essentially ‘departments of state’. Each of these Domains is headed by a Grand Sapient. The Grand Sapients are collectively known as the “Twelve”. The diagram on the right shows each of the Domains and the associated duties that each is required to carry out. The Twelve not only match the 12 lunar months—one of the reasons the Wise use the moon-eye as their sigil—but also thus to the twelve […]

Each of the watchtowers that march alongside the roads of the Guarded Land is provided with a heliograph. This is a complex device consisting of a louvred panel of mirrored strips that can be angled and rotated to catch the rays of the sun so as to send messages to a neighbouring tower. Operated by the ammonites who staff each tower, messages can thus be jumped from one tower to the next, permitting back and […]

Ranga shoes maintain purity, but also demonstrate rank. There are two kinds of ranga: those used in the outer world and court ranga. The ranga used outside Osrakum are believed to offer protection from the contaminating earth. When the Wise wear ranga on the outer shore of the Skymere, it is because this is considered more impure than the Isle. Court ranga are more complex mechanical devices, indicating rank in proportion to their height—as is […] 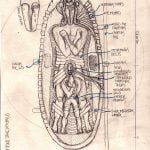 A sapient capsule is shown set vertically and open. Within it ‘stands’ a Sapient with his homunculus between his legs. Both are ‘stowed’ for transit—held in place by many leather straps. Note the hollow they are in is padded to absorb shocks as the capsule is moved from one place to another. The Sapient is wearing a standard sapient mask to which breathing tubes are connected (coming into the capsule from the right). Note the […]

When the new Halls of Thunder were constructed, the Wise continued to use the chambers they had used in the ancient halls. The diagram here shows the location of the Library of the Wise, the positioning of the ammonite arrays, as well as the chamber that is the terminus of the heliograph system providing the Wise with a direct link to every watchtower in the Guarded Land and every legionary fortress.

More than a location, the Library of the Wise refers to the 2500 or so benches with their more than 30,000 reels of beadcord that constitute the written works of the Wise. That said, there are two specific locations at which the Library is generally found: the Halls of Thunder and in the Halls of Rebirth built into the wall of the Plain of Thrones. The benches, closed for transport, accompany the Wise as they […]

This lies in a valley a little west along the coast from Thuyakalrul. A purple dye, prized by the Chosen (especially the Wise), is extracted here from the bodies of ammonite shellfish. This industrial process uses a system of vats that scale the sides of the valley. Products and residues are flushed down through the vats by a river, diverted by means of sluices. Labour is supplied by sartlar. The resulting effluent running into the […]