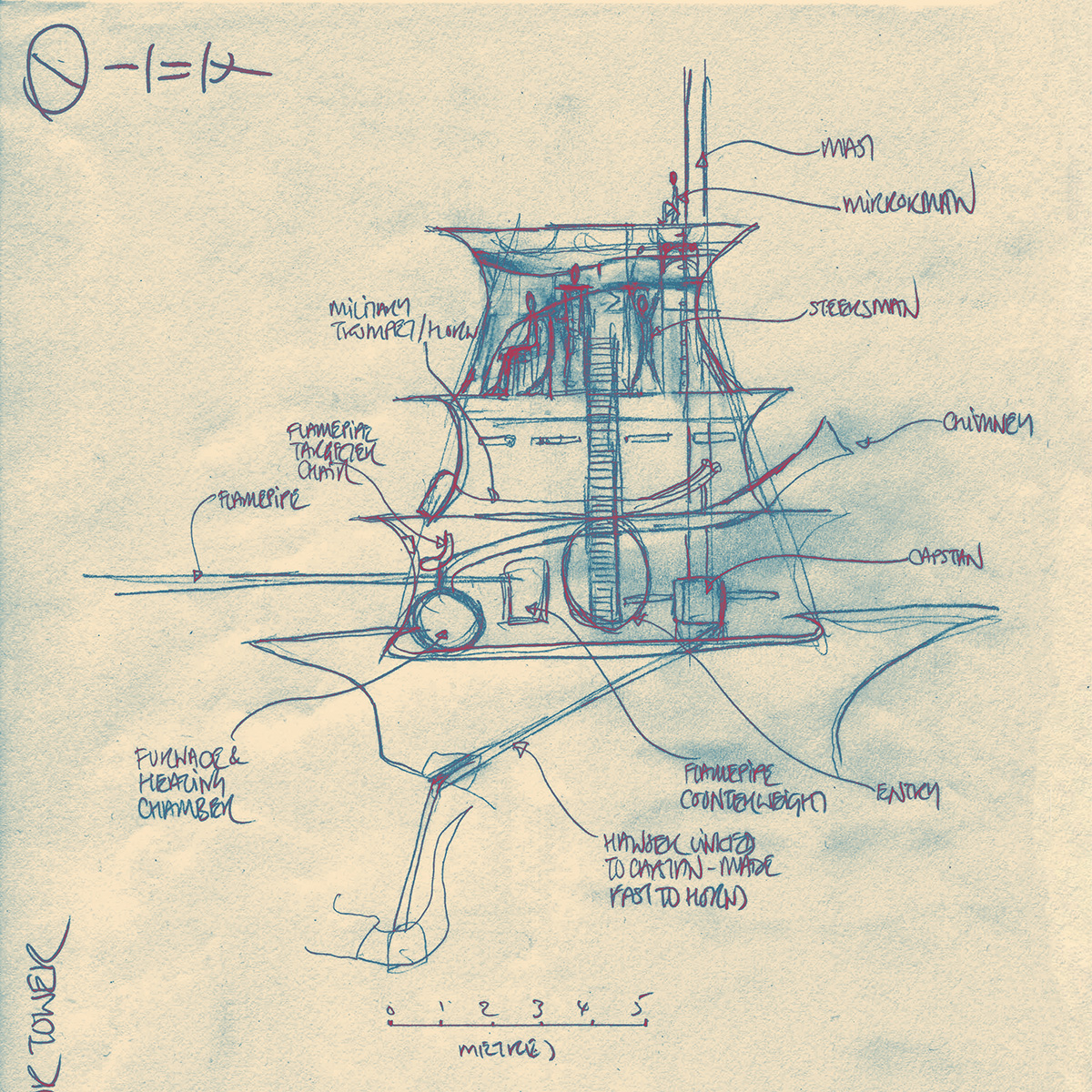 The first sketch shows a Master sitting in the command chair of a dragon tower. Before him is the lattice bone screen that he looks out through. On either side of him kneel his Righthand and Lefthand, with the tubes connected to their helmets that allow them to be talked to by other crew in various parts of the tower. At both lower corners of the drawing can be seen the ‘voice forks’ that the Righthand and Lefthand speak into when they wish to transmit their Master’s commands

The second diagram shows a cross-section through a tower. The Master commander can be seen sitting in the topmost deck. On the roof is the ‘mirrorman’ who is used to receive and send heliograph signals and to transmit signals to and from the lookout high in the mast that can be seen passing down through the tower to the lowest deck, where it forms the axle around which the capstan turns. This capstan controls the hawser connecting to the dragon’s upper pair of horns, so allowing it to be ‘steered’. A ladder gives access to all decks. The middle deck carries, along its edges, two immense trumpets like alpine horns. The lowest deck contains the furnace that feeds naphtha to the flamepipes. These project out of the front of the tower and are balanced by means of counterweights moving within the tower. The furnace vents its exhaust back along chimneys

The third diagram shows a plan of the lowest deck with the hawser wound round the capstan, the centrally located furnace and a flamepipe showing something of its arc of motion

The fourth diagram shows another cross-section through a tower showing the furnace and flamepipe, but also the naphtha tanks located in the tower base. It is the weight of the tower super-structure that keeps the naphtha under pressure, that forces it through the furnace where it is heated, then projected along the flamepipes to ignite, on hitting open air, in a fiery arc

The final diagram shows some rough sketches exploring how the rigging binds the upper, truncated pyramid superstructure of the tower to the base that is bound with a girdle around the belly of the beast. This rigging also ‘seals’ the naphtha tanks in the base