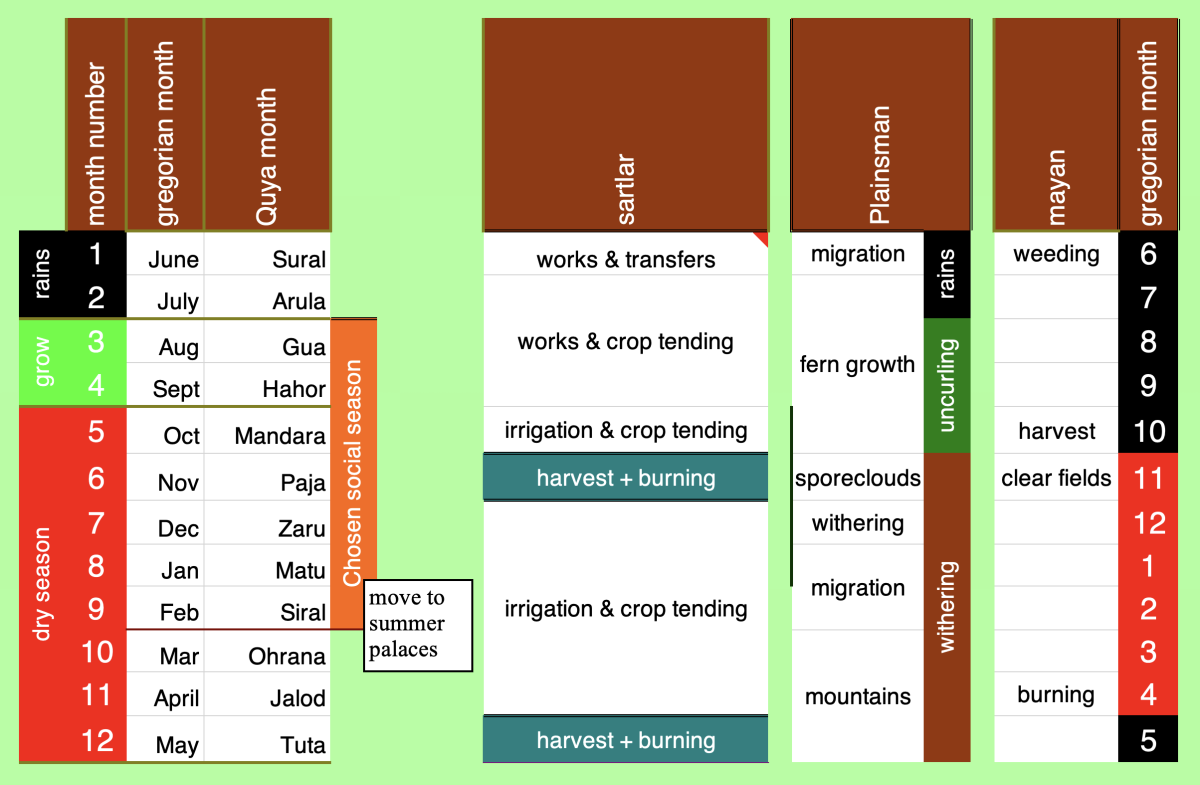 This shows a composite of the calendars that I used throughout the writing of the Stone Dance. This covers not only the calendar used by the Chosen, but also how this interfaces with our own. The seasons of the Plainsmen are shown, as well as a comparison with the Mayan calendar that was what I used to give me an understanding of a tropical monsoon climates. Other information related to the seasons is included

The Chosen inherited their calendar from the Quyans. Like all calendars, that of the Quyans seeks to measure and describe the passage of time and of the seasons as accurately as possible. The drive for this is particularly important in an agrarian based civilization. This importance is reflected in the calendrical stones that are located in the Plain of Thrones and that are called the Stone Dance of the Chameleon

There are twelve months and three distinct seasons each characterized by a colour. Thus we have the Rains (black), the Growing Season (green), the Dry Season (red). The months in a season take that season’s colour. This arrangement is reflected in the colour of the 12 calendrical stones forming the innermost ring of the Stone Dance of the Chameleon, each one corresponding to a month

The Rains consist of the two black months—Sural and Arula—when the monsoon, coming from the sea in the far south-west, progressively breaks over the Guarded Land and Osrakum. The first day of Sural is generally the beginning of the new year, though the year can actually begin on an intercalated day (see below)

Quyan astronomers calculated their year to be 396.145 days long, and divided it into 12 lunar months, each of 33 days

Clearly, if they had left it at that, their calendar would quickly go out of sync with the observed year. To avoid this, they applied corrections, between the end and beginning of a year: these are termed intercalated days and are applied as follows. An extra day is added every 8 years—unless this falls at the end of a 48 year period, in which case two extra days are added—unless this falls at the end of a 1200 year cycle, in which case only a single day is added. Generally, the Apotheosis of a new God Emperor occurs at the beginning of a new year and can thus be held during an intercalating day

In the world of the Stone Dance, a day lasts 23.63 of our hours. Despite this, because of the extra number of days, the Stone Dance year is longer than ours. As a consequence the characters in the books are actually a little older than their stated ages might suggest

Underlying these timings is my original conceit that the Stone Dance is set on our own world, in the Late Cretaceous, when the Earth turned more quickly on its axis and when its orbit around the sun was slightly further out