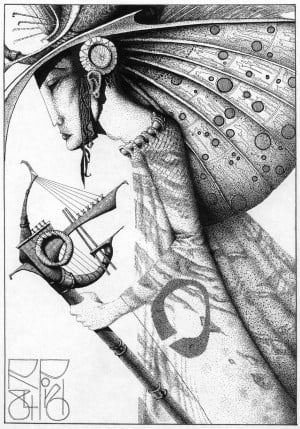 a Master and Lord of the Chosen © ricardo pinto

This is one of the first images I ever produced relating to the Stone Dance. It depicts one of the Chosen, and already contains many of the books’ core elements. Anatomically bizarre, the figure presages some of the themes of mutilation and freakishness. There is the complex symbolism of the nested crowns, with the feather-like ribbing, but abstract butterfly patterning. The mask is already there—though at that stage it was quite Art Noveau, as are the tresses that hang before the ear—though, later, my Chosen dispensed with hair altogether. The figure has, in its posture and mood, I feel, something of the arrogant remoteness of the Chosen. The focus on exotic materials—revealing fabulous refinement and wealth—is shown in a robe that, in some places, is transparent, but, in others, scaled; the whole striped like some animal skin. The strange instrument, as a finial on the staff, recalls the sigils of the Wise and, and resembles a ship. The sleeve bears a design that later became the glyph, mual, connoting zero and emptiness, but also—as does the circular element above the ear—recalls the crater of Osrakum—even though this only finally came into being more than ten years later.