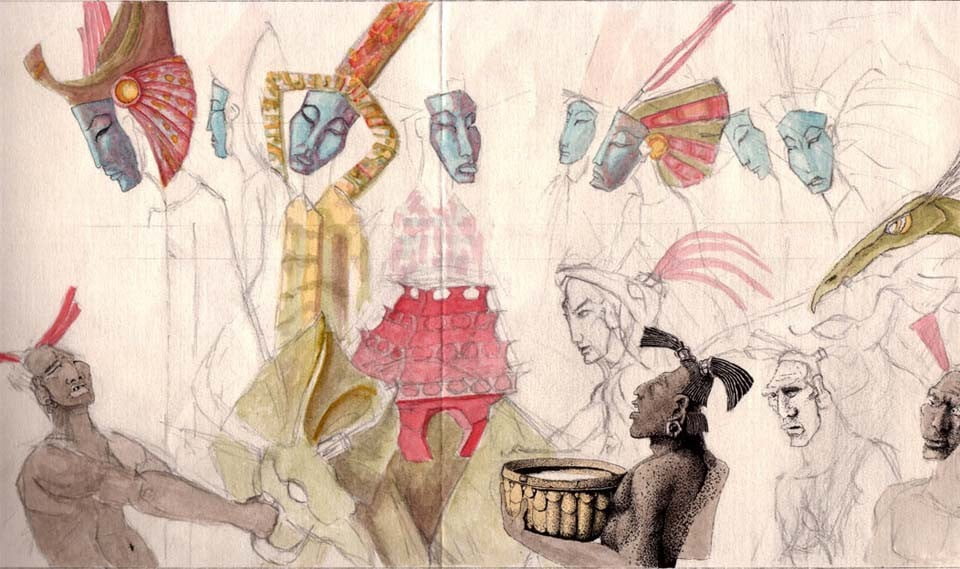 a procession of the Chosen © Ricardo Pinto

Osrakum is a theatre in which the Chosen play out their rituals of power. Display and grandeur are at the heart of these rituals and yet, except at the ceremony of the Rebirth that is held annually in the Plain of Thrones, these are rarely witnessed by their subjects. Their households bear constant witness to this pomp, but it is not they whom the Chosen have in mind as being their primary audience.

This picture attempts to capture a procession of the Chosen and is in two registers: the Chosen above, their slaves below. The two castes are separated, not only by the masks the Chosen wear, but by the difference in height (often exaggerated by ranga). Contrast the serenity of the Chosen with the strain and labour of their servants. Their conversations occur, in every sense, above the heads of their slaves.

Most of these gatherings of the Chosen are rituals performed for magical reasons: symbolism of movement through sacred spaces dynamically complementing the static symbolism of their costume. But the pomp, with its display of wealth and beauty, is intended for the eyes of others of the Chosen. It seems to me that the audience sought is always those who have power. So the Romans put on their triumphs and games for the people of Rome because they feared them. The pomp of Versailles was restricted to the king and the aristocracy, in whose hands all power lay. In our modern democracies the people have ultimate power, so that all display is for them. Imagine how different would be the election in the Chamber of the Three Lands depicted in The Chosen had it been televised…