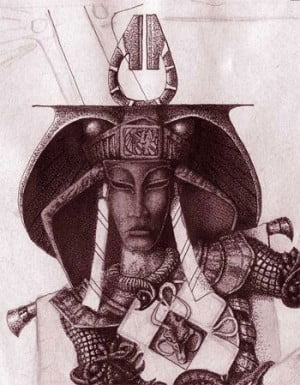 sketch of one of the Chosen 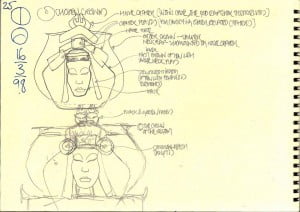 crowns, including that of the Regent

The first image is a sketch—that I made, I don’t know when—that is a precursor of the image that appears on the cover of the Second Edition The Chosen. The second is a page from my notebooks, in which I worked out how such a crown might be constructed from various components. Both reflect my interest in symbolism as expressed by costume. The contrast between the aesthetics of the naked human body as promoted by the Ancient Greeks (and that has had such a profound effect on our sensibilities—particularly in the West) contrasts with Asian cultures, for example, in which the shape of the body is deliberately concealed so that costume becomes symbolic.

Contrast, for example, the costume of a woman from Medieval Japan with its reliance on artifice, with the body enhancing fashions of the West. The first seems to me to be a projection of an interior, ‘virtual’ notion of femininity: the second the presentation of the ‘actual’ and physical.

Nowhere is this ‘virtualization’ of costume more fascinating to me than in portrayals of power. The Chosen take this process to an extreme by using masks to remove the last vestige of their humanity—the face.

The starting point for my elaboration of Chosen headgear is probably the double crown of the pharaohs of Egypt. The white crown of Upper Egypt sits within the red crown of Lower Egypt, both upon the head of pharaoh as a symbol of his suzerainty over both lands. I adopted this for my own Triple Crown, that a God Emperor wears as a symbol of his rule over the Three Lands. It resonates with the papal triple crown or tiara.

My focus on headgear is perhaps best shown by the chapter in The Chosen in which Carnelian, returned to his ancestral palaces in Osrakum, is asked to choose which of a variety of crowns he wishes to wear. The precious materials from which these crowns are made has something to do with the display of wealth and, in the exotic variety of the materials, demonstrates the extensive power of the Chosen, but what is more important is the symbolism embedded in a crown to communicate issues of power and identity. In this respect, the Chosen are no different from other elites throughout history, except perhaps in how far they are prepared to go to demonstrate their power.