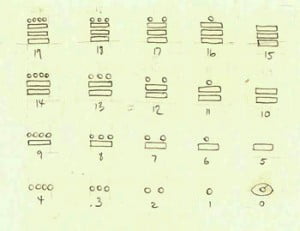 Having a passion for the Maya, I adopted their numbering system for my books. As far as I know, the Maya are the only people other than the Hindus to have developed the zero—an invention that is essential for a positional numbering system. The symbol used by the Quyans for zero differs from the Mayan in that it represents a broken cistern rather than a seashell. The broken cistern indicates emptiness—presumably that too was the rationale behind the Mayan use of a seashell.

Quyan numbers can be written vertically—with the units at the bottom.