a limit on human creativity? 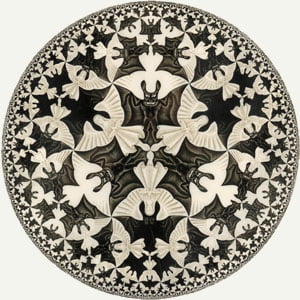 With our creativity, we explore a space of art and culture, of science and technology, that expands outwards in all directions. By perceiving reality more clearly, we develop more sophisticated skills and tools that, in turn, deepen our perception of reality. It seems natural to believe that this virtuous circle is accelerating us towards an infinite horizon. But is this true and, if so, in what way?

The further back we look, the less has been explored, so that a single person can make great advances, sometimes in several sectors at once. The first explorer of a sector lays claim to the foundational part of it. As each new sector is found, fewer are left to be discovered, and are likely to be further out and narrower.

As children, we must trek over this discovered country from its centre. With each generation, in any sector, we have to travel further to reach its frontier. The further we are from the centre, the more difficult it is to discover anything new, and the smaller any discoveries become. Ever more people and resources, ever more complex instruments, are required to push the frontier onwards.

This process of exploration does not seem to be accelerating—never mind it being an exponential curve ramping up to the ‘singularity’. Though the frontier tends towards an infinite circumference, its radius seems to be tending to a limit. We may be trapped within an event horizon we can never hope to escape.

(One way to escape this event horizon may be to increase human creativity. This could perhaps be accomplished by some kind of genetic or technological enhancement—but, most likely, these would only push the limit a little further out. Another way might be to supplement human creativity with that of artificial intelligence: here is an argument about that possibility.

It may seem foolish to put limits on what our science will discover—reality is likely to surprise us. Nevertheless, it seems to me that there are good reasons to suppose that our ability to penetrate reality may be limited—if only because the instruments we need to probe it are already beyond our capability to construct. As an example, consider how physics has resorted to String Theory, considered by many to be more metaphysics than science.)

6 thoughts on “a limit on human creativity?”