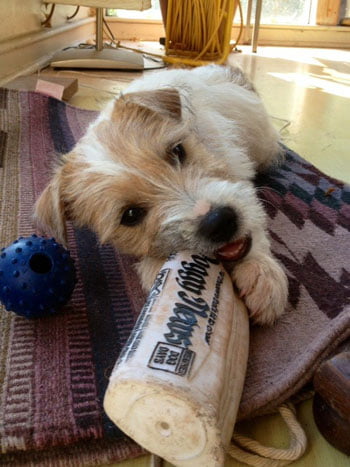 I have an ongoing preoccupation with vision – not only ours, but that of other creatures. For us vision is such a dominant and personal way through which we experience the world, that it can be surprising to learn how limited it is in comparison to that of other creatures. We have more limited perception of colour – for example – than not just birds, but also lizards, amphibians and even many fish. The retinas of most of these animals contain four distinct cones that operate across a part of the electromagnetic spectrum that reaches into the ultraviolet. Because we evolved from lizards, we should also have these four cones but, alas, the shrew-like creature ‘bottleneck’, from which all mammals descend, was nocturnal, and for that reason two of the cones were lost. Some primates later acquired a third cone through a mutation of one of the two cones remaining – though this new cone is inferior to the one lost that spanned the red part of the spectrum.

Toby, my new puppy, brought this issue of colour vision into focus (as it were) when I decided to investigate the notion (that seems to be widely held) that dogs are restricted to seeing in black and white. As it turns out, they are not… they see using the standard two mammalian cones, and their vision is roughly equivalent to humans who have red-green colour blindness. The two spectra on the right show the comparison between dog and human vision. Feeling pity for my pooch’s ‘colourless’ view of the world, I happened to notice a wood pigeon striding about outside, in my garden, and could not help recalling that pigeons have five cone colour vision. If that pigeon were to have his colour vision ‘degraded’ to our level, then he would be justified in feeling more pity for our human ‘colourless’ view of the world, than I did for Toby’s.

Imagine what our paintings would look like had we a pigeon’s eyes. Alas I can’t show you a pigeon’s spectrum of colour vision because – well, we simply are no more able to see or imagine those other colours available to a pigeon, than Toby can see red.

4 Replies to “beauty is in the eye of the beholder”