why driving on the left may be safer 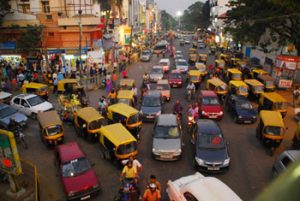 The world is divided into those who drive on the left, and those who drive on the right, apparently in a proportion of one third to two thirds. Although surely it would be more convenient if we all drove on the same side, the choice, made in the past, to go for one or the other, has now been carved into the landscape and could not easily be changed. Does this difference matter? Certainly it imposes costs on car manufacturers, and there are costs also in human effort and, perhaps, in accidents as people abroad, accustomed to driving on one side, have to adapt to driving on the other. These costs would almost certainly be exceeded by those resulting from changing the handedness of all the roads across a whole country – both in money, and in accidents as an entire population adapted to their new roads. 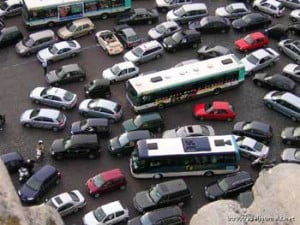 A contention that driving on the right or the left is equivalent presupposes that human beings function symmetrically; that we can as easily do something to the right as to the left – and we know that this is not true. Clearly, in a car in which the gears are changed manually, it cannot be irrelevant whether we are using our left hand or our right to do so. People are predominantly right handed, and thus it would seem that, for most of us, we should be able to change gears more ‘naturally’ in a left-hand drive car.

Now this point may seem a tad trivial – after all, right and left handedness is a matter of statistics, even in the individual: studies have shown that there are many tasks in which a right/left choice has to be made – from writing by hand, to unscrewing the top off a jar – and that, across this range of tasks, a right hander will not always preferentially use his right hand; each individual thus having a more or less fixed pattern of right and left hand use across a range of tasks. No doubt, as left handers do manage to adapt to a right handed world, anyone is capable of learning to be proficient at changing gears with whatever hand he is required to use by dint of where he learns to drive.

However, a more profound aspect to this lies in the functional asymmetry in our brains: brain functions seem to be unevenly distributed between our left and right hemispheres with a specific distribution that is even found in most left handers. The preference we have, to use one hand or the other for this task or that, derives from this asymmetry, but is by no means its only consequence.

From my understanding of Iain McGilchrist’s book The Master and his Emissary, the right hemisphere perceives the world as a whole, is deeply attuned to the particular, the individual, the immediate; and has no problem with ambiguity and paradox, with complexity and unknowability. The left hemisphere, by contrast, is obsessed with abstraction, with wheedling out underlying geometries, with generalities; what it perceives it dissects and analyses. It focuses on what it knows and seeks certainty and single, definitive answers.

This all suggests to me some interesting questions. Could it be, for example, part of the explanation for the different way that people drive in right-traffic and left-traffic countries? Is driving on one side of the road inherently safer than driving on the other?

Disclaimer: I know that the photos prove nothing – I only wish I had found more amusing ones to, tongue in cheek, illustrate my thesis

5 thoughts on “why driving on the left may be safer”