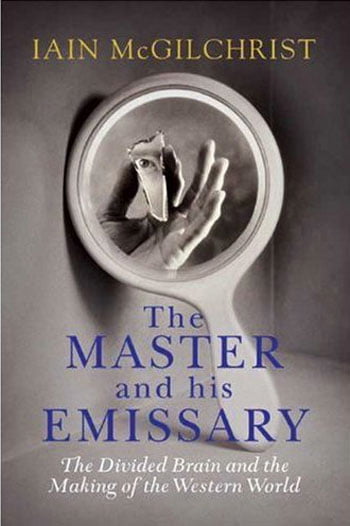 The Master and His Emissary: The Divided Brain and the Making of the Western World is not a self-help book, nor is it one of those books of cod-philosophy that promise amazing (though ultimately ill-founded) insights into the modern condition. It is instead a carefully argued thesis meticulously supported by references to research, as well as by appeals to personal experience.

Its core premise is that we possess a single consciousness, but two wills: one each in the right and left hemispheres of our brains. McGilchrist posits that these hemispheres are profoundly asymmetric – not only physically (they have measurably different widths and lengths, for example), but functionally.

The right hemisphere perceives the world as a whole, is deeply attuned to the particular, the individual, the immediate; and has no problem with ambiguity and paradox, with complexity and unknowability. The left hemisphere, by contrast, is obsessed with abstraction, with wheedling out underlying geometries, with generalities; what it perceives it dissects and analyses. It focuses on what it knows and seeks certainty and single, definitive answers. Critically, the left hemisphere’s field of operation is essentially what the right hemisphere passes to it. McGilchrist suggests that an optimally functioning human brain should gather impressions from the world with its right hemisphere, pass these to the left for analysis and then, crucially, integrate these analyses into its holistic picture.

The first half of the book builds up what appears to be an impressive body of evidence to support this view – evidence not only from neurological studies and practice, but also from art and philosophy. In the second half of the book McGilchrist then applies this theory to Western history in an attempt to explain many of its developments; a venture that he admits is extremely ambitious.

Roughly speaking, he claims that in the West we have, as a consequence of a move into abstraction that began with the ancient Greeks, coupled with our increasingly materialist perspectives, gradually moved into a way of being that favours the left hemisphere – that, finding itself in the man-made world resulting from its manipulations and over which it feels it has complete mastery, it is no longer prepared to relinquish control back to the right hemisphere. This “betrayal”, McGilchrist suggests, is increasingly dangerous for us – for the left hemisphere view is necessarily narrow: the greatest whole it can conceive of is that that it can assemble from the pieces into which it breaks everything down. Thus we cease to see living things, our planet, the universe, as anything more than a machine that is a sum of its parts: a vision of living things as misguided as Dr Frankenstein’s.

McGilchrist’s arguments seemed to me convincing enough, though necessarily I had to take most of the supporting evidence on trust – as in most such books, how can we hope to be able to check it out for ourselves.

However – and this is why I am writing this endorsement – I found that much in the book gels with my own experience. Like many (most? all?) people, I have two sides: one that is intuitive, connected to nature, free flowing; the other analytical, obsessed with orthogonality, analysis, precision and getting to the right answer. These war in me all the time, but never more so than in my work. In the Stone Dance, for example, I would often get lost in ‘research’, exploring every avenue, pursuing every problem until, frequently, I would squeeze every last drop of blood from the visions that had inspired me to write at all. (This ‘deadening’ is, according to McGilchrist, a sure sign that the left hemisphere is hard at work.) But then that other part of me would swoop down and snatch up these dead fragments and absorb them into a vision more vibrant than before.

Thus a constant problem with my creative process is that I feel I have spent altogether too much of my time slicing away at ‘corpses’ and perishingly little in exhilarating ‘flight’. In the struggle to maximize the latter and minimize the former, I have often veered towards attempting ‘flight’ on its own, without any of the preparatory surgery of research and analysis (Icarus not bothering to glue the feathers to his wings?), only to find that it all becomes so airy that it dissipates away to nothing. Imagine my excitement when this process is explained to me; its necessity, its naturalness; to become confident that what is required is to seek a balance between the two.