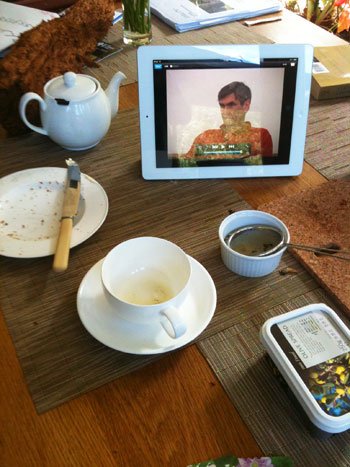 I’ve been hankering after a tablet computer for many years (I hope not as a result of having been brainwashed by Star Trek!?). Specifically I was wanting Apple to produce one. I have been using their computers since 1984 and supported them through the hard years before Steve Jobs returned – much in the way other people support a football team that keeps losing. Now that they are becoming masters of the galaxy I find myself somewhat embarrassed by my adherence to Apple – as communists perhaps did when Stalin turned their dream into a totalitarian dystopia. However, I have spent all my working life within Apple’s ecosystem, and whatever criticisms can be levelled at them – the lock ins, the strong arm tactics, the hyper-capitalism – I still believe that, ergonomically and technologically, their ecosystem is the best one out there. And so, last month, I finally got myself one of the new iPads.

Of course the device is beautiful, and beautifully designed. It is slick and seductive. What it is not is a replacement for my laptop: the means provided for entering text cannot compete with a keyboard. However, my tablet has already replaced my laptop as my primary way of interacting with the internet. For anyone not needing to enter a lot of text into a computer, it seems to me that a tablet is a superior device. Further, I am convinced that tablets represent the future of non-business computing and, with the integration with the ‘cloud’ that Apple have announced this week, I feel we are moving into a new era where computing will become ever more pervasive, while at the same time becoming ever more subtle and, essentially, invisible.

The form factor of the tablet seems to sit in a ‘sweet spot’. Long tethered to desks by cables, computers had already slipped their bonds. However, laptops, for all their power and luggablity, are very much present; if not by their weight and size, then by their need for at least the desk we make for them on our thighs, which they reward us by trying to cook them! This heat is itself an indication of one of their major limitations – their short battery life.

And though smart phones slip into a pocket and run longer on a single charge, for all their sophistication, they are like peering at the world through a keyhole and, if that world is the web, then we have been forced to operate it by performing something like keyhole surgery.

A tablet is large enough for you to feel that your view of cyberspace is essentially unimpaired and it provides a field of operation that does not feel overly constrained. It is light, thin, small and mine seems to run for days on a single charge though I use it all the time. It also switches off and on, simply and cleanly, like those others of our gadgets (TVs, washing machines etc) that we barely notice are there.

I am old enough to have grown up with all the computery gubbins of commands and controls, of settings and variables, of virtual filing systems; old enough that I have programmed directly in machine code – the direct instruction layer lying just above a processor chip. Though this kind of esoterica may seem to some ‘sophisticated’, to me it has long seemed the very height of crudeness. I have friends who keep telling me that the fatal flaw with Apple computers is that you can’t easily lift the bonnet and tinker with the engine. I am one of those people who really can’t be bothered with the engine. I simply see my computer as a means – not an end: I simply want it to ‘get me there’. Further, I believe that the trend in everyman computing is to gradually dissolve the device until it becomes invisible. What is a computer but a window that you look through? – and as Elizabethan glass, with its countless tiny distorting panes, has given way to plates so large you can’t see the edges; so clear you can almost, like a bird, forget it is there – with the tablet, computers become more nearly extensions of ourselves. Further still, the elimination of the prophylactic that is the keyboard allows you to interact with the device directly with your naked fingers: skin on glass, though that glass is, through gesture, enlivened to a surface that you can twist and pull, pinch and ruck. I imagine that, once haptic feedback is refined and incorporated into the device, we shall be able to feel its skin, to prod and squeeze its callouses, to ruffle its feathers *grin*… If this comes to pass, will it be possible for us to consider such devices as anything less than an organic part of ourselves?

The final element required to sink the computer interface beneath the surface of the sensual world is to liberate the medusae, that are our data, from the cages of our desktop computers and laptops, up into the ‘cloud’ – letting them swim freely in cyberspace (the problems inherent in the server farms that will support that freedom are another issue). This transformation is going to free us from the tedious rituals of backing up (or the anxiety of not backing up), and of synchronisation. Our data, safe (at least from loss; security from being viewed or used by others is yet another issue), and that we can beckon to us from any device we’re near, will, it seems to me, become an almost unconscious extension of our minds…