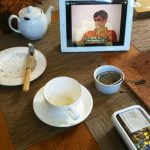 I’ve been hankering after a tablet computer for many years (I hope not as a result of having been brainwashed by Star Trek!?). Specifically I was wanting Apple to produce one. I have been using their computers since 1984 and supported them through the hard years before Steve Jobs returned – much in the way other people support a football team that keeps losing. Now that they are becoming masters of the galaxy I find […]