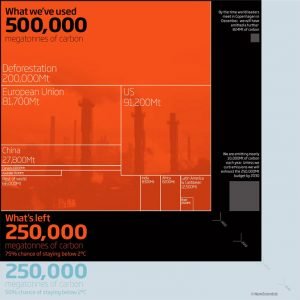 Here’s another of those wonderful graphics (discussed in a previous post). It instantly makes many things clear. Not least how responsible we are in the West – the US and Europe in particular – for the predicament we find ourselves in. Also how little China and India and Brazil, the new ‘bad boys’, are responsible.

And most crucially, how little time there is… Then, when you combine it with this other graphic… noting especially the red box near the centre (not to mention other hilarious boxes, such as the grey one labelled “bribes received by Russian officials”)… then is there any need for me to say anything else?
tags: climate change, copenhagen, fossil fuels, planet earth