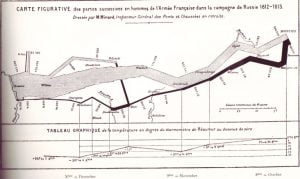 The graphic above (courtesy of my friend Keith Brunton) is considered by some to be possibly the best statistical graphic ever drawn. By Charles Joseph Minard (1781 – 1870), a French engineer, it shows the terrible fate of Napoleon’s army in Russia.

Quoting from “The Visual Display of Quantitative Information” by Edward R. Tufte: “Described by E. J. Marey as seeming to defy the pen of the historian by its brutal eloquence, this combination of data map and time-series, drawn in 1861, portrays the devastating losses suffered in Napoleon’s Russian campaign of 1812. Beginning at the left on the Polish-Russian border near the Niemen River, the thick band shows the size of the army (422,000 men) as it invaded Russia in June 1812. The width of the band indicates the size of the army at each place on the map. In September, the army reached Moscow, which was by then sacked and deserted, with 100,00 men. The path of Napoleon’s retreat from Moscow is depicted by the darker lower band which is linked to a temperature scale and dates at the bottom of the chart. It was a bitterly cold winter, and many froze on the march out of Russia. As the graphic shows, the crossing of the Berezina River was a disaster, and the army finally struggled back into Poland with only 10,000 men remaining. Also shown are the movements of auxiliary troops, as they sought to protect the rear and flank of the advancing army. Minard’s graphic tells a rich, coherent story with its multivariate data, far more enlightening than just a single number bouncing along over time. Six variables are plotted: the size of the army, its location on a two-dimensional surface, direction of the army’s movement, and temperature on various dates during the retreat from Moscow.”

The seed of this post was actually this, but I have treasured the graphic above (with the book that I must return to my friend) for a long time – and wanted to share it with you.

Now, somewhat demonstrating the way my brain works, and though the link feels to me a tad clunky, I would like to make the following comments:

I read somewhere that, in the Middle Ages, in France, when the king wanted to inform his people of something, he would send out a proclamation that would then be announced, in the public squares of towns and villages, by town criers. And that, apparently, however long the proclamation, it was the case that just about anyone who heard this would, in turn, be able to pass it on ‘word perfect’ to anyone they met. Such a feat of memory today might well have you classified as an idiot savant…

Where has this ability gone? Apparently, the parts of our brain that would memorise such a proclamation have been ‘overwritten’ by the act of learning to read and write… So, it seems, you can have one or the other, but not both. It occurs to me that, had sound recording equipment been invented before writing, writing might never have been invented at all. Today, when our ‘masters’ wish to speak to us, they can do so directly through screens. Screens are everywhere, and though they are still heavily textual – sound and the moving image, and graphics (such as the ones above) carry more and more of the burden of communication. Is it too fanciful to suppose that the future of humanity lies beyond the written word? That our technology might return us to our roots – an oral and visual culture? Certainly, reading and writing is something we find difficult, something that we have to be forced into as children… I wonder if, in the million year communicating history of our species, writing may be a mere blip, a temporary diversion…