life in an ivory tower 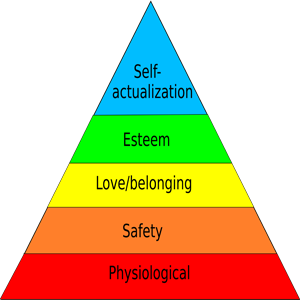 The Oxford English Dictionary defines an ivory tower as “a state of privileged seclusion or separation from the facts and practicalities of the real world”; the Merriam-Webster as “a secluded place that affords the means of treating practical issues with an impractical often escapist attitude.” These definitions also describe the apex of a Maslow hierarchy of needs. If the occupants of an ivory tower lacked for water, food, clothing or shelter, they would not be separated from practicalities. They must be secure from attack, have enough money and access to doctors. They have at least each other’s companionship and might expect mutual esteem. Others less fortunate might disparage them, but their envy is mixed with grudging admiration.

Humanity throngs the various levels of the Maslow hierarchy. Most of us have no choice but to deal with the facts and practicalities of the real world. But that ‘real world’ is predominantly the ‘human world’: our ways, our rules, our systems dominate people’s lives. Apart from a tsunami or an earthquake, Nature no longer holds sway over us: we are elevated above other animals into a privileged seclusion and separation from the Natural world.

Unlike the Maslow hierarchy, our ivory tower has a basement, and it is packed with wretches who lack even the basics of life. In the floor above are the poor, prey to violence and disease. Above them are those who enjoy healthcare and safety, but who suffer from the loneliness, the strains and dislocation of modern life. Within view of the apex are those who would appear to have everything, but feel they are neither seen nor admired enough. Those in the bright and airy apex lack for nothing. Through luck and perhaps hard work, because of talent and good guidance, supported by the labour of the people below, they can seek to become the best they can be: to create and think, to gaze out from the tower—deep into the heavens or under the sea; into the mysteries of material reality or pure mathematics; into the past, and even into the future.

But ivory is ripped from elephants, walruses and narwhales. Look closer at our tower. Beneath its gleaming surface are dead forests and ash, the remains of extinguished species, metals gouged from land wounds that weep poison, living soil turning to dust in the sun—all saturated with thick black oil and choked with plastic. We take more of everything to build the tower higher, whatever the cost. While some of us plan to reach heaven, others struggle, dog-eat-dog, to climb up towards the promise of the apex that glares from their screens. Up there, the fortunate indulge their appetites, lost in dreams of greatness and power, blinded by utopian visions; and most who peer down see an Earth as flat and remote as if viewed from an aeroplane window.

While we obsess over the strife and chaos in the tower, its foundations fail. What if our tower falls? Too many of us have now climbed so high that, even if we descend, we no longer have the skill and resilience to survive on the lower floors. Besides, the ravaged world outside cannot support our multitude.

We have but one resource that has any chance to save us: the people in the apex. For good or ill, what we call civilization—our technology, our art, our science, our philosophies—originates* there. We have despoiled the Earth to raise millions into privilege that not even kings dreamed of. An ocean of educated minds with access to godlike freedoms and powers and knowledge. If only we could put aside our vanity and petty rivalries and together save what we can while we still can.

Years ago friends christened my apartment in Edinburgh the Ivory Tower. Rather than fight this, I embraced it, and still use the domain ivorytower.co.uk.

*see exchange below with Angeline

10 thoughts on “life in an ivory tower”