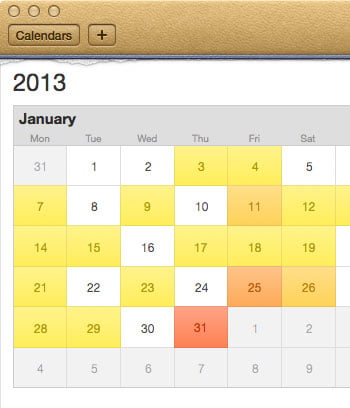 “Skeumorph” is a term I only came across recently – and like many such terms, once you learn of its existence, it ties up a set of things you already knew about, in a bundle that gives you a better grasp on that issue than you had before. Once aware of it, you start to see it everywhere.

Skeumorph is defined by Lexicon.com as: an object or feature which imitates the design of a similar artefact made from another material. The current vogue for use of this term is mostly related to the design of digital interfaces. A good example is Apple’s Calendar app with its faux leather effect (the first image – note the torn margin where it is suggested that a paper page has been ripped out). Much liked by Steve Jobs, it apparently reproduces the interior trim of his private jet. It seems that Jonathan Ive may well be about to dispense with this kind of thing.

I do not deny that there is something ‘cute’ about skeuomorphs, and I suppose that – as computers became capable of producing realistic faux glass, or steel, or wood – I was as wowed by these novel effects as anyone else. There are people out there who will defend skeuomorphism as being helpful and pleasant. Counter arguments can be made on aesthetic grounds that seem to me reminiscent of the modernist architectural creed that ‘form should follow function’ – a position that I am increasingly sympathetic to. However, I would like to advance a different argument that it is beyond the realm of aesthetics, for I believe that ‘skeumorphs’ are not only hampering desirable developments in some areas, but are potentially being used by some corporations against the common interest.

An example of a ‘skeuomorphic’ mindset being misapplied is, I believe, in the various ebook systems (that I have experienced). I have expressed my support for ebooks elsewhere, however, my hope for what ebooks could become is currently being frustrated by the reality of what ebooks are. What irks me most is ‘navigating’ the text of an ebook. Animations of pages turning in mimicry of a paper book are all good and well – though a clear skeuomorphism – but they do nothing to help with moving around the text of an ebook. You can ‘bookmark’ a page, and you can slide through the pages, and you can go to a contents page – each a skeuomorphic example of paper book mimicry – however, none of these actually provide the comparable functionality of a paper book. In a paper book, a bookmark allows instant access to the bookmarked page because it is always at hand: the ebook equivalent is only visible if you are on the page it marks, otherwise it has to be located on a special bookmark page. The page slider on an ebook attempts to provide us with something akin to leafing through a paper book, but, without the physical ‘feedback’, I find it almost unusable. After sliding back and forth a few times, I mostly resort to swiping forward one page at a time to find what I am looking for. An ebook’s content page can be accessed without losing your place in the book, but if you choose to go from there to some other part of the ebook, then you will only be able to return to your original position if you had had the presence of mind to bookmark that page. This problem could easily be avoided if the ‘go back’ button available on all browsers were present – but, for some reason, rather than using the technology commonly used on computing devices, the designers of these ebook systems (the one’s I’ve experienced certainly) are so committed to the skeuomorphic project of mimicking a paper book, that they don’t feel the reader needs one. Imagine how difficult a browser would be to use without a ‘go back’ button?

In a bid to mimic paper books – no doubt with the laudable view of not frightening off traditional readers – the designers of these ebook systems are doing something like roping stuffed horses to the bonnet of a motor car in the hope of easing the transition from carriages. I suggest that ebooks are going to remain clumsy and frustratingly unmanageable until we stop thinking of them as paper books, and instead begin to explore the true nature of what they actually are and could be.

Another attempt to treat ebooks as if they were paper books is Amazon’s proposal to allow the lending and reselling of ‘used’ digital books. This is skeuomorphism applied on a conceptual level. Similar attempts are being made across various digital media. These attempts seem to me to have more to do with preserving the business models and commercial hierarchies that existed before the digital revolution, than on satisfying any need in the consumer. What is interesting is which characteristics of the physical objects being superseded are being selected for skeuomorphic ‘simulation’. These corporations wish to avail themselves of the advantages of digital objects: their ability to be distributed across the internet and to be produced in unlimited numbers – thus avoiding distribution, warehousing and printing/manufacturing costs – but wish to pretend that digital objects are like physical ones in that they cannot effortlessly be cloned by whoever wishes to do so, and thus to be obtained free of charge from the internet. This initiative on the part of Amazon to give us back the facility to lend and sell our books has nothing to do with benefitting their readers, but only to further extend their control over our ebooks.

Ebooks and other digital objects ‘want to be free’* – that is their inherent nature. I would suggest that any attempts on our part, to try and impose on them the restrictions inherent in what it is they are replacing, are bound to fail. Perhaps the little skeuomorphisms of Apple’s faux leather calendar may need to be ditched because, in part, they lead to the repressive skeumorphisms being perpetrated by corporations like Apple and Amazon. All revolutions are painful for the people who experience them, but they are only worth enduring because of a general perceived need or desire for change. For the digital revolution to justify the chaos that it is wreaking on consumers and producers of art and entertainment, it must be to the advantage of all. If the promise of these new digital forms is going to be fulfilled we need to resist skeuomorphs.

*how we recompense the creators is another issue, and one I will try and address in another post

After this post was substantially written, I did come across this skeuomorphic ebook system that goes some way to assuaging my gripes about ebook navigation – and I am including it for fairness.