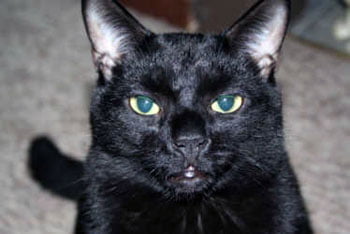 In our culture at least, cats have been associated with magic. In European tradition cats were seen as being a typical ‘familiar’ of a witch or warlock. I would like to suggest that, on the contrary, it is cats who perform magic, and that it is we who are their familiars.

As in many ‘systems’ of magic, cats cast spells primarily by means of vocal utterances. They gaze at their familiar, that is their human, they utter their spell, and magically food appears, or water, or a nice bowl of milk. If the magic does not work the first time, recasting the spell will normally do it. Now you may argue that this is not magic at all, that this is only evidence that the cat has managed to domesticate its human. Consider another example: the cat spell for opening doors. The cat magician, merely gazes at the door that it wants opened, utters its spell, and, miraculously, the door opens. (Sometimes this kind of spell is accompanied by some sorcerous paw gestures.)

No doubt you’re thinking: that’s not magic! Perhaps it is not so from your point of view, but how does it appear to the cat? Imagine, if you will, one of our magician cat’s wilder relatives – a lion, say. What would a lion imagine was going on if, merely by roaring, a gazelle were to fall dead at his feet?

By domesticating us, cats have managed to acquire a means of controlling their world that their forebears (to avoid confusion: cats are not descended from bears!) could only dream of. Ah, but then dogs can perform magic too, I hear you say. That’s arguable, though I would say that a dog feels himself to be human (or considers us to be dogs too), and so is well aware that a door opening at a woof is not magic at all, but a favour done for him by one of his pack mates. A cat’s view of us is not contaminated by such delusion. It knows that it is a cat and that we are not, and it knows how to do magic.