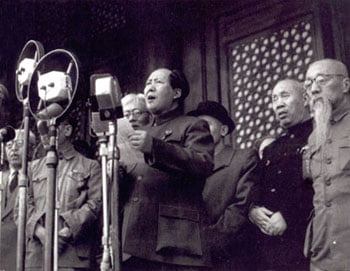 I have a notion as to why the Chinese authorities are delaying the opening of the tomb of the First Emperor, and it’s not the official reason given. I think I can also make a reasonable guess as to when it will be opened…

In 221BC Qin Shi Huangdi became the first emperor of a unified China. Even though his dynasty collapsed shortly after his death, that unification has not been undone to this day. The First Emperor began work on his tomb when he ascended the throne of the petty state of Qin. The location of this tomb has been long known. The famous Terracotta Warriors are merely one set of guards buried in the ground around the tomb. The tomb itself is a massive artificial mound that is 76 metres high, and the interior of which is described in the account of the historian Sima Qian. Apparently, its floor is a model of his empire in which the sea and rivers are represented by flowing mercury. Tests carried out on the summit of the mound have detected mercury fumes saturating the earth in a pattern that seems to hint at a map of China. If this is true so, presumably, is Sima Qian’s claim that the tomb was filled with unimaginable treasures.

Though the authorities have permitted the excavation of the terracotta warriors, they have forbidden any attempt to open the tomb itself – even though it is believed that it is still intact. The reasons given are along the lines of: the tomb and its contents may be of such quality and quantity, that China does not have enough archaeological resources to do it properly or: that current technology is not yet up to the job. These explanations are plausible, but I feel there is another underlying reason that has not been voiced: politics.

If the tomb is intact, then it must surely contain the choicest treasures. When we consider what incredible artefacts must have adorned the courts of the various states that the First Emperor conquered; treasures that were surely looted – the contents of Qin Shi Huangdi’s tomb could make that of Tutankhamun look like a garden shed. The opening of King Tut’s tomb opened the eyes of the world to the glory of ancient Egypt. The glow of excitement resulting from when that tomb was opened in 1922 has still not faded; and Tutankamun was a minor pharaoh: Qin Shi Huangdi was the man who brought to an end the Warring States Period. The China he unified was incomparably vaster and more wealthy than ancient Egypt.

Consider how carefully the Chinese government managed the Beijing Olympics so as to not only communicate to the watching world China’s increasing wealth and power, but also her long and glorious history. How much more carefully must they wish to manage the opening of the tomb of the First Emperor. This event might well display to a wide-eyed humanity the incomparable splendour that was China. How could the wonders of the First Emperor’s tomb not serve to underline the claim that the Middle Kingdom can rightfully make that, throughout history, she has been one of the primary centres of the world, if not indeed the centre.

So, it seems to me that the most likely date for this opening will coincide with China’s income per capita becoming the largest in the world, and according to at least one projection, this will occur in 2048… or perhaps the opening will be delayed until 2049 to celebrate the centenary of the establishment of the People’s Republic of China…*