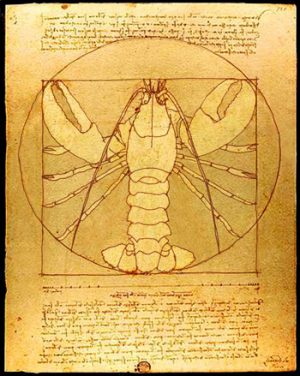 Thank you Darwin for liberating us from the absurd notion that Man is God’s ultimate and most beautiful creation. When this notion was generally believed – at least in the West with its obsession with Ancient Greece’s perfect white marble nudes (that we now know were painted as gaudily as the carvings that smother Hindu temples) – did no one actually bother to look at other living things? Did no one see butterflies, birds, mammals, fish, cephalopods, jellyfish, the exquisite miniatures that are insects and the myriad other beasts with which we share our planet? In what did our purported supreme beauty consist? Surely it was not colour, nor pattern, nor iridescent plumage. Other species challenge us for beauty of eye, of limb, of skin. Or is it in another Ancient Greek conceit that our divinity lies: the supposed sublime beauty of Man in motion? At least Usain Bolt is doing something we were ‘designed’ to do – but are we also going to claim this triumph for Man in water; as if we somehow outdo the fish, the dolphins, with our splashing.

This attitude that Man is the very centre and the purpose, the crowning glory of Creation can surely only be held by people who live in fear and terror of their own insignificance. I have no doubt that early Man, close as he was – necessarily close – to Nature, did not dare these absurdities. For him animals were his brothers, sometimes even his gods. But then we started to move away from Nature, to get ‘above ourselves’… and, scaling the pinnacle of Creation, we attempted to enthrone ourselves upon its utmost summit. And from there, with imperious gaze, we fancied ourselves the Rulers of Creation, and who can doubt that we still do?

This mania started in fear, and with the thrusting out of our chests to impress each other, but it ends altogether more messily. We put this lie in the mouth of our gods. We use it to justify the way we wish to treat other living creatures as things, as resources. We insist on making Man the measure of Creation. Darwin confronted us with the truth, and it was devastating, and can we doubt the part that trauma played in the darker dramas of the 20th Century?

Still, if you ask anyone who has heard of Darwin, what it is his theory proves about us? many people will point to processions of apes and early humans slowly straightening, eventually becoming the paragon that is Man. We still persist in imagining some gulf between us and other animals. This belief, this thing we seem to need to believe, has become ingrained. No amount of evidence is going to change our minds. Why should it? Even before Darwin we surely saw that we bore the same basic shape as many other animals. We must have noticed how when we copulated it was not some grand act elevated beyond what we saw other animals doing. We must have noticed that this most perfect of God’s creation still needed to go to the toilet… and that if such wasn’t present, we squat to defecate as so many other animals do. No, I don’t believe that Victorians were really shocked to find out that they were descended from apes – I think it was just that it threatened to force them to admit what they must have already suspected, and that whatever trauma we suffered was merely our hysteria at no longer being able to peddle the delusion of our near-angelic status.

Why does this matter? Well, it certainly matters to the creatures who we harm all the time, often deliberately. It matters in that it allows us to decide that increasing the size of our economy is more important than preserving this species or that; each every bit as valuable a leaf on the tree of life as are we. And ultimately it matters – let’s get back to business as usual – because our need to believe that we are ‘special’ makes us blind to the reality that underpins our existence, and we are approaching a time when that reality is threatening to do to us what we have done to so many other species.