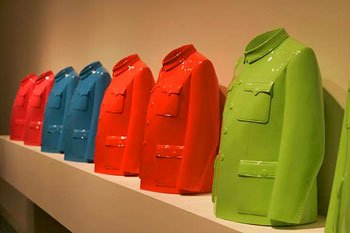 It occurs to me that, rather than individualism leading to consumer culture, it is the other way round. Perhaps this is obvious, but it is only recently that I have become aware how – with each choice I make; for the clothing I wear, the furniture I have in my home, the kind of soap I use, the kind of food I choose to eat – I distance myself from my fellow man. I see him and cannot help noting the choices he has made and reflecting on – judging, even – what this says about him. When he looks at me, no doubt, he draws his own conclusions.

This process of ‘becoming by consuming’ has deepened as I have grown older and, concurrently, as the amount of ‘things’ I can purchase have become ever more diverse. It seems to be this very diversity that is one of the primary reasons that people everywhere crave the ‘consumer lifestyle’. Those who live in consumer cultures claim, and are claimed to be, individuals – this seems surely true, however I do wonder what exactly this ‘individuality’ consists of. How much is this ‘individuality’ merely a description or classification of the mass of objects and lifestyle choices that has a human being at its centre? If a consumer has the misfortune to lose all his possessions, by becoming a refugee for example, does he cease to be an individual; and, if he does so, does this come about because of how he sees himself, or how others see him – or both?

Is it possible for someone to become an ‘individual’ without the consumerist system that supplies him with the objects that he uses to define himself – to others and to himself? Is it possible that a person belonging to an isolated Amazonian tribe might not be able to become an ‘individual’ – at least in the sense that this self-identification transcends that of the group. In the Amazon everyone, presumably, would have access to the same materials with which to make artefacts and to adorn himself. The need for artefacts to be functional, and the limited repertoire of such functions and of the methods for creating such functions, must necessarily make most everything that he possesses indistinguishable from that that his fellows possess. Unable to sufficiently accentuate and differentiate his ‘individuality’, would the group naturally become his primary mode of identification?

It seems to me that an argument can be made that, the more consumerist a society is, the more atomised it becomes. When choice of clothing is essentially unlimited, even a random selection of clothing would leave you dressed differently from other people. Thus ‘individuality’ is forced on us more by the circumstances in which we live, rather than by being inherent in a person. Consumerism amplifies the small variations there are between you and others, until these become prominent both to other people and, crucially, to yourself. Seeing yourself as different from other people isolates you from them – they become ‘other’. By this means, surely, social cohesion is increasingly diminished. People end up isolated in their individuality. What part does this play in explaining how unhappy and unsatisfied we are in consumer societies?