the kindness of strangers…

beneath his coronation, the king rides off in full armour, a knight hundreds of years before they were ‘invented’ in Europe

I’m in Kermanshah at the moment where it is raining gorbehah and sagah. To be able to inflict this (feeble) joke on you, I wanted to confirm what “cat” was in Persian and, since my bad pronunciation wasn’t doing it, and because my taxi driver’s English was rudimentary, I had to resort to making animal noises and feline impersonation (worse than rudimentary, I’m afraid). After an embarrassingly long period attempting this he suggested, cooly, in English: Cat? At which point we both dissolved into raucous laughter. 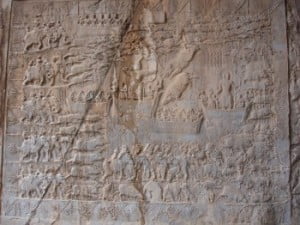 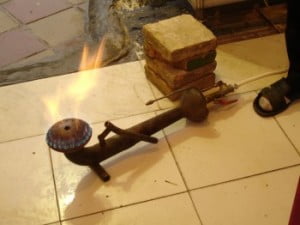 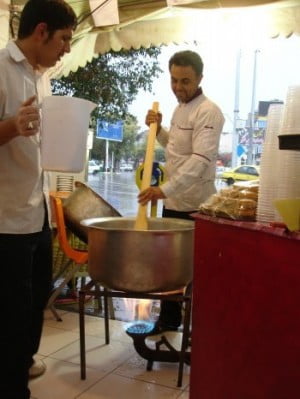 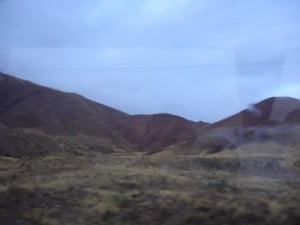 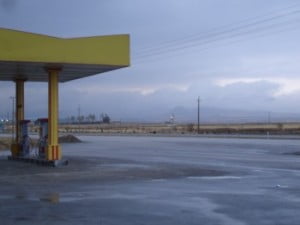 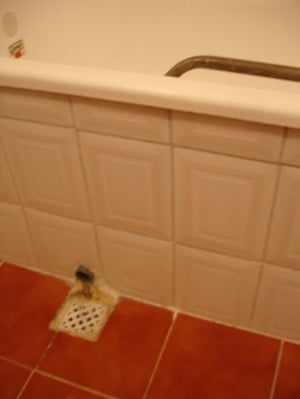 a bath plumbed by a madman 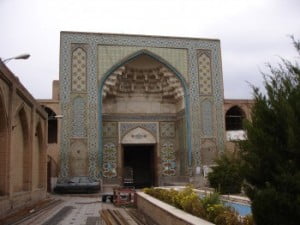 entry to a mosque in Qazvin 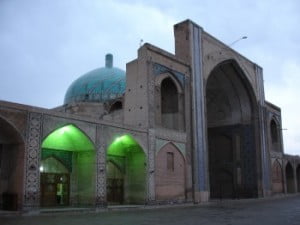 in the mosque courtyard 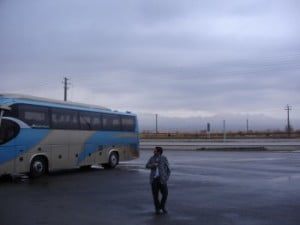 Ahmad and the coach we travelled in 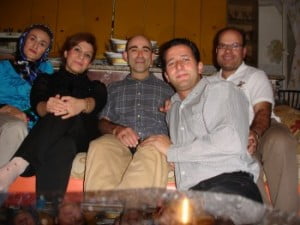 Zahra, Rajeleh, me, Ahmad and Majid 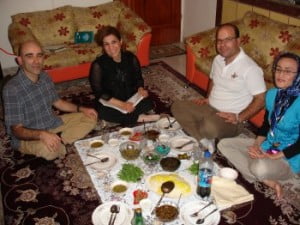 delicious meal made by Zahra 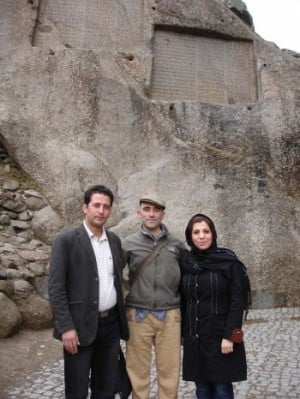 Now I’m telling you this to give you an indication of what my day to day experience is like encountering Iranians. Whether in groups or alone, young or old, male or female; I almost always get the same reaction: faces brighten with delight and, beaming, they try what English they have on me – and if they have none, they try Persian, or mime. They ask me where I come from and how I am liking Iran. At some point they always welcome me to their country. On several occasions I have been invited to be a guest in their homes.

This morning I went to see some exquisite Sassanian reliefs, in a taxi with an old fellow who quizzed me incessantly in Persian – so that I had to try and respond with what Persian I could in turn manage to produce – I then returned by means of the ‘cat’ taxi and was left off at a roundabout and, after much tramping around in the rain, I found that yet another of the restaurants described in my Lonely Planet guide no longer existed (the Lonely Planet guide has not been updated since 2008 and, among other failings, the prices it quotes are generally at least half what they actually are now). I eventually found somewhere to eat and was condemned to yet another chicken and rice; I had been after something with vegetables in it. Afterwards, I went in search of an internet cafe… again finding nothing of the kind where the book said their ought to be one. Drenched and forlorn I asked various locals if they knew of one and, after I had told them where I came from etc, they pointed me in various directions, alas to no avail. At last I asked a young soldier who, sheltering me under his umbrella, insisted on making it his life’s mission to find me an internet cafe. Eventually, having tried half a dozen, we found they were all closed. He left me to wait until one reopened in the care of a man running a little shop that seems to sell nothing but a rather delicious concoction called ferni with little almond cakes. He gave me a bowl of the potion and a couple of the cakes. I can give you the recipe for ferni because this man, Reza, and his partner, Masood, suddenly dragged an immense gas burner into the middle of the floor of the tiny shop, placed an enormous steel bowl above the roaring flames and began stirring up a batch – much to my delight, I can tell you! While this was going on, customers were squeezing past the flames and bubbling cauldron in a way I don’t imagine our Health and Safety would have been very pleased with. So the recipe is water, milk powder and sugar brought to a boil, rice flour is then stirred in a separate bucket to stir out the lumps, and the whole lot is combined and stirred with a wooden paddle until it thickens. Throughout we plied each other with questions and became friends. They refused to let me pay for what I’d eaten, insisting it was given to me with love…

Now I am British enough to find all of this affection – and it’s hard to feel it as being anything else when you’re receiving it – sometimes a little unsettling. Something kicks in that seeks to undermine the authenticity of what’s going on, but I am constantly striving to disarm this suspiciousness for I know it is entirely uncalled for and says a lot more about me and – dare I say it, folks: us – than it does about these kind and warm people.

Yesterday afternoon I set off from Hamadan in a savari, a shared taxi – with a woman sitting in the front and myself and two soldiers, in camouflage uniforms, in the back. We were stuffed in that taxi for nearly three hours without a break. During this time one of the soldiers, the older of the two, started up a conversation with me. Now, I would like to point out that I have to trigger these chats – because, in spite of the slightly silly hat I have elected to wear (a tweed flat cap) as an attempt to signal my ‘faranginess’ – yup, that’s what they call anyone who doesn’t speak Persian – everyone seems to think I’m Persian until I open my mouth (actually, sometimes even then – as long as I don’t say too much. So the older soldier started talking to me – and everyone save the woman joined in, the soldier acting as interpreter. We muddled along and managed to communicate quite a lot about each others’ lives – the young soldier, only a teenager, was shy, but got involved too. Then I was informed that the woman, all shrouded in black, had phoned her husband to pick her up and wanted to drive me to a hotel. I touched her shoulder to thank her and everyone recoiled with shock and I was told, that in Iran, men never touch women. When we arrived, true to her word, the woman and her husband drove me to a nice hotel, and when they were sure i was satisfied, they drove off. As it turned out, the hotel ended up being too pricey for me – and too posh in that ostentatious way that makes me feel uncomfortable. So I left and the the guy manning the front gate asked me if he could help, and we managed to communicate, and he put me in a taxi and sent me on my way, to the hotel I’m currently staying. This, though exceedingly seedy and tatty, is very clean, though the bath for some reason is piped to empty out all over the floor and the water to run away into the squat toilet, besides which is a toiler of our kind. Most bizarre, but then I’m not here for the plumbing.

Incidentally, on my first night there, I witnessed a spectacular thunderstorm while reading my iPad in the dark and eating grapes. Little pleasures…

Now, from Tehran I went to Qazvin, though now I can’t really work out why. Someone recommended it to me, but it wasn’t who I thought it was. I had a rather depressing time there that involved another of these: Ricardo goes wandering off in vaguely the right direction, misjudges the distance, gets wet and tired, and doesn’t find what he is looking for. Once, in Tehran, I strode off manfully northwards only to find, half an hour later, that I had actually been going south. I wish I could entirely blame it on how confusing these cities are, but clearly I must shoulder some of the blame. Be that as it may, Qazvin was good for me because it allowed me time to reconnect to the real reason I am here – which is research for my book AND that, beyond this, what really matters is the experience of actually being here. This latter point explains why this post is entirely about people and not ruins. (Though for those of you brave enough to read these travelogues to their bitter end, the ruins are yet to come – oh yes!)

Thus we come at last to the dusht, ahem, or meat of this post. I hope my new friends won’t mind me displaying photographs of them here, I did try to explain that I might but that conversation spiralled out of comprehension.

On the bus from Qazvin to Hamadan, I chose a seat near a window – though it was all a bit rainy and gloomy to see much – and a man sat down beside me who offered me a biscuit and then we fell into conversation. Ahmad is an architect who lives in Hamadan where he was born, but some of his work is in Tehran. Not long after, he said he would like me to come and stay with him. At first I said no, thinking that this would be a great imposition on him and his wife, but he insisted and, eventually, I said yes.

When we arrived in Hamadan, his friend Hosein was there to pick us up. He was the first man with a shaved head I’d seen and I told him so. When we arrived at Ahmad’s he laughed, drew my head towards him and planted a kiss on it. Ahmad invited me into his beautiful home where I met his wife, Raheleh. They immediately planted me in front of a table loaded with all kinds of little cakes and sweets; specialities from all over Iran. Ahmad’s brother appeared with some friends. He lives upstairs and their parents above him – each in separate flats – quite a common occurrence in Iran. After much chat, I was whisked off to friends, Zahra and Majid, recently married and just moved into another beautiful home – this one with some retro 60s touches to it. Zahra had prepared a delicious meal of Persian rice (grown in various localities in Iran and very like basmati), khoresht (a stew of various herbs – that make a dense green sauce, kidney beans and bits of lamb), another lamb dish with celery, yoghurt with shallots and some other herb, fresh herbs and spring onions, pickles of various kinds, and warm flat breads. Wonderful. Then we men smoked some orange-flavoured tobacco from a ghalyan (hookah or water pipe). Zahra’s sister arrived with her husband and child. It was a delightful party.

The next day, Ahmad and Raheleh took me to see the inscriptions cut by Darius and Xerxes into a cliff above Hamadan. Then to see the archaeological dig of the remains of the Median capital of Ecbatana – the reason I came to Hamadan. A meal out with some other friends and their children, and back to their house for tea, home to pack and Ahmad drove me to the savari (long distance taxis) station and negotiated my trip (with the woman and the two soldiers). We parted warmly.

I can’t imagine that if Ahmad were wandering around Britain, as I am doing in Iran, that he would be so warmly welcomed. It seems to me strange that such overwhelmingly kind, gentle and hospitable people should have somehow acquired a reputation such that, everyone I told that I was going to Iran thought me brave for doing so, and that my friends and family feared for me…

apologies if some of the photos are a bit dark, this is because I am unable to adjust the contrast in this internet cafe, but also this reflects how bad the weather’s been here…

8 thoughts on “the kindness of strangers…”