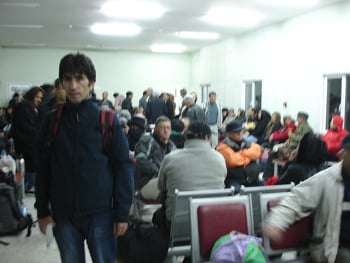 The first thing to say is that I missed the terrible earthquake at Van. Lucky for me, and for the others on the train, not so lucky for those poor Turks. From previously knowing none, I have recently met quite a few, and have spent hours talking with some – so that now they seem to me less remote; I have had direct experience that they are, essentially, indistinguishable from anyone else I know. Seems to me that we all know this with one part of our brain, but there is another part that is not so sure. Anyway, I wish them well.

Incidentally, and to swerve the mood dramatically, if I were superstitious, not to mention insanely narcissistic, I might begin to feel that I was some variety of Typhoid Mary: whenever I leave my hermitage in the woods, things happen: 9/11 when I was in a Mayan jungle, the tsunami in Sri Lanka a year to the day when I was travelling along in a bus on the same stretch of road that it washed away, the Icelandic eruption when I flew to Portugal and, now, this horrible thing at Van. There are people who would connect these sorts of things into a ‘pattern’.

Anyway, back to reality – of sorts. Tehran is one of the biggest cities on the planet and one of the things that proves it is the incessant floods of wheeled machinery that course down it’s thoroughfares. It really is the craziest thing if you look at it with British eyes. Not that you can have the leisure of looking at it very long without having to scamper for your life. It’s akin to the way that in Cambodia I observed flows of traffic – bicycles, tuk-tuk, oxen pulled carts, cars, buses, trucks – all hurtling towards a crossroads from all four directions at the same time and, somehow, everyone whisking (or plodding) through without mishap. In Tehran, something like this miracle is produced on every street and junction all the time, except that here they do have traffic lights, though really they seem to be some kind of starting gun. And the poor pedestrians – I’m one of those, folks; in places where there are no pedestrian crossings (even where there are, these seem negotiable…) pedestrians, merely using the power of faith, set off across the road and the torrent of cars and motorbikes pretends that you’re some kind of moving traffic cone at a rather jolly driving test. I tried to film this for you today, so that you could experience the anxiety of having all these vehicles rushing at you, but I have, as yet, not managed to work out how to get the film off my camera, onto my iPad, and from there onto YouTube so that I can embed it in this blog. The moment I crack this nut, you will be the first to know.

Yesterday, I woke intent on defurring my head when I discovered that my clippers were, apparently, kaput. I had to resort to shaving my head so that, when I issued forth, I looked even more of an alien among the, generally, universal thick mops of black hair on the people crowding the streets. Today, by the way, I somewhat botched my arrangements – only managing to make one of the several museum stops I had intended – and instead ended up, in what an unreasonable person might constitute as ‘being lost’, wandering the streets scrutinising faces, glancing into shops and generally ‘drinking in the ambience’. Alas some of this consists of toxic fumes, so that, while I’ve been here, I have had that feeling one gets when a nasty throat cold is coming on. Now what I noticed, or think I noticed, was that there is more variety here in the faces and body types than I am aware of noticing anywhere before. Now, of course, this is also true in, say, London – but there we are talking about people from many different parts of the world – races, if you will. Here in Tehran, just about everyone looks ‘Iranian’ (and quite often, beautiful with it) – it’s just that they come in every conceivable size and proportion and, for all the faces that reminded me of ‘types’ I’ve seen before, there are always new ones coming into view of which I’ve never seen the like. I can only conclude that this must have something to do with Iran being a sort of ‘corridor’ connecting East and West, even North and South – so that everyone has, at one time or another, passed through – and as they do, romantic dalliances occur – and some not so romantic…

So, back to my bald head. I took it out for lunch with a rather nice guy who made friends with me on the train, and since he had pressed on me that he wanted to show me around the city, I agreed. We had a perfectly nice time, if not a little fraught – what with trying to keep up a conversation with my few Persian words and his many but not entirely fully connected English, while being pushed in and out of taxis – with other people getting and out as we swerved towards the curb, herded on and off the metro, or being drawn into the path of oncoming traffic that was behaving as if, somewhere behind us, a limited amount of land was being sold at a dollar an acre. I wanted him to take me to some place selling some ‘typical’ Persian food, and we did get some, but from a sort of Persian Macdonald’s on the top floor of a shopping mall. We talked about life in Iran – with little asides as I continued my ‘learning Persian’ offensive.

Later I met up with Ali Tavakoli Dinani – an architect that I had met on Facebook through (the ubiquitous – at least in the context of this expedition) Lloyd. He took me for a very nice meal and told me that he had an aspiration to come and do a phd at Edinburgh University on the architecture of the Qajars. Somehow I got him doodling on my notebook – I have come to learn that, once coaxed to put pen to paper, architects find it easier to pour their thoughts out while drawing buildings, and I began to ask him about Persian gardens and one thing led to another and I received the most wonderful interactive lecture on not just gardens, but all kinds of modes of architecture, at different periods and how each is exquisitely adapted to the any given one of the many varied landscapes and climate zones of Iran. What began as a technical discussion blossomed into a spiritual one. For Ali is in love with this flower of Persian heritage, and I, having witnessed it as he sees it, am now half in love with it myself. For he is pursuing a tradition that is glorious but now lost to modern Iran and that, like Japanese architectural tradition, is one that the whole world could learn from. More than this, it’s entire spiritual heart lies in producing buildings that are married to the environment. If you were to sit and have him explain how, in the great salt desert that lies at the heart of Iran, people had, for centuries, manufactured ice, which they stored so that they could have  blocks of it for refrigeration in summer; of wind towers that produce natural cooling in buildings; of the use of spaces differently aligned to the compass points, to provide living spaces comfortable and elegant for use at different seasons – then you too would realise that his vision is not to academically dissect a long dead corpse, but rather to nurture a seed back to life, one result of which could be to reunite his people with something they have lost, to renew their confidence in themselves, to free them from the ugliness of the soulless modern urban ‘development’  that is disfiguring their land.

Before I left good ol’ Blighty, one of the speakers at the Persepolis conference I attended said that, when he first went to Iran in the 60s, it had still had that peculiar quality of light that the poets had celebrated – but that now, alas, because of air pollution, that light has dimmed. When I heard this, I was disappointed, for it was one of my chief aims in coming to Iran that I should experience this light. This is not merely an aesthetic whim, for there was something in the quality of this light that has profoundly influenced the thinking of the Persians. To take just one example, it is light that is at the heart of the revelation of Zoroastrianism – and it is from that ancient religion that springs so much that is familiar to us: heaven and hell, the last judgement, angels, the holy spirit – all these things were gifted us by the ancient Persians – for these inspirations found their way into Judaism, Christianity and Islam – and who among us is not still affected by that?

Oh, and one last thing – the one ‘attraction’ I did manage to reach before the doors closed was the National Jewels Museum. Now, as anyone will tell you, I am more given to getting starry-eyed over precious stones than the next man, and let me tell you that jewel collection has more of them than I could imagine were in the world – and I’m not saying that for effect. What they have down there is a vault where glass cases are stuffed full of cups, and tiaras, and swords, and boxes, and clothing, and pendants and all manner of strange objects literally encrusted with rubies and emeralds and diamonds. In places there were bowls filled with rubies and emeralds, and chests overflowing with pearls, and a long fringe of tassels, each as big as your hand, made entirely of seed pearls, not to mention a throne the size of a bed, or a globe (you know the kind, that in the 60s people thought it tasteful to hinge open and turn into a drinks cabinet. Well, this globe had emeralds densely crusted for seas, and rubies for the continents (with, revealingly, Britain, France and Iran laid out with diamonds.) You get the picture: a gaudy Hollywoodesque notion of ‘splendour’ – though this was real of course. Well, I found much of it ugly. There were some nice pieces, where the gems had been allowed to form dense, somewhat amorphous, crusts. But wherever attempts had been made to form them into birds, or flowers, or who knows what, it just looked hideous to me. If you had turned most of it into identically coloured papier mâché, I dare say it would not have looked out of place in the art show by primary threes. Perhaps I’m being unkind…

Anyway, there I was wandering up the road feeling jaded (sorry) when who should come walking towards me large as life but my good friend Muchaba, We could hardly believe it that, in a city of 16 million, we had simply bumped into each other. Nearly crying with laughter, we hugged and then Muchaba introduced me to his friends, one of whom, started squeezing his thighs (for some reason that wasn’t clear to me) and Muchaba told me: “oh, he a joker” – and in an aside: “he an Arab” – that with a conspiratorial nod… You couldn’t make it up!

4 Replies to “In Tehran”