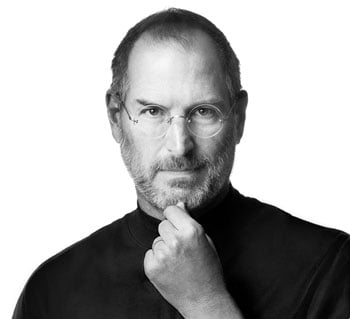 I was literally woken this morning by the radio coming on announcing the death of Steve Jobs. I was shocked. Of course we all knew that he was ill, but I didn’t imagine that he would die so soon.

I came across my first mac in 1984 (all these ancient recollections are a bit imprecise when it comes to dates etc) when I worked for British Telecom as a development manager in their computer games division Firebird/Rainbird. Part of this operation was the then cutting edge desktop publishing software running on a number of macintosh computers – beige cubes with small black and white screens with attached laser printers. It wasn’t long before I became seduced by these little computers with their mice and graphical interface. So that, when I left to go and work on my own, I bought myself a Mac SE, with its capacious 1MByte hard disk and some few K of RAM for the princely sum of £2500 – not trivial now, and a fortune then.

I used this computer for years – or slightly better specced ones that I upgraded to – and I stuck with Apple (through laziness, habit, or misplaced loyalty) even when all around me PCs were blooming into riotous colour while I was still ghettoed in black and white. For a period, I worked on a PC and found its operating system simply too ugly, cumbersome and clunky for comfort. And then, Steve Jobs returned to Apple and began the amazing reincarnation of those principles that had drawn me to Macs in the first place.

So, I speak as someone who has lived within the Apple ecosystem for my whole working life. At one point I was loyal to the company the way some are to a football team – even more passionately so if they’re constantly losing. Then Apple rose and rose until my niche interest became a global phenomena. Now I am far more suspicious of Apple because, having grown larger, they are often one of the worst bullies in the playground. Nevertheless, I still cleave to the Apple ecosystem because, for me – and a large component of this may simply be my deep familiarity with it, though, in truth, it has changed and is changing a lot – it provides me with kit that is, most of the time, ‘transparent’ to me. I am not interested in the computers themselves except as windows into the computable world. I just want to be able to reach in and make and explore digital objects with as little awareness of the portal through which I pass. Beyond this primary consideration, I am also grateful that Apple kit does not disfigure the world I live in. For example, I work at a desk in the centre of my livingspace and so it is not inconsequential that my computing kit shouldn’t be some monstrous carbuncle *grin*

For all his reportedly unpleasant characteristics, it seems to me that Steve Jobs has striven always to make the interface between ourselves and the digital world as ergonomically functional as he could and thus he has helped make that world a natural extension of ourselves. Considering how much we now live in that world, that seems to me no mean legacy…

One Reply to “steve jobs”