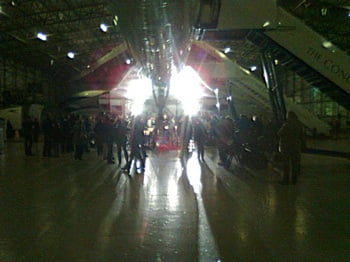 Sunday past I went to a performance of Philip Glass’ 1000 Airplanes on the Roof in a hangar, at East Fortune in Scotland, that has been built around a decommissioned Concorde. It was a promenade concert – allowing us to walk around as the piece – a “melodrama in one act” – was acted out, and the music played. I found the conductor Jessica Cottis to be more worth watching than the actor. She conducted Red Note Ensemble – a small chamber orchestra consisting of synthesisers, some wind instruments and a soprano – with amazing control, delicacy and precision: the whole a tad surreal as the musicians played beneath the belly of the giant ‘paper dart’ of the Concorde.

This was as mesmerising a performance as I have seen anywhere – not unworthy of New York, never mind rural Scotland! It was part of the Lammermuir Festival (my little house nestles in the foothills of the Lammermuirs) that is only (as far as I understand) in its second year and, from the size and enthusiasm of the audience, I can hardly believe it will be it’s last. That such an ambitious undertaking should even be attempted in the countryside near Edinburgh, and so soon after that city’s own massive festival, left me pondering…

Ever more people live on this planet of which an ever increasing proportion are becoming ‘educated’. Consequently, audiences for all kinds of art are swelling, as are the cohorts of artists and performers producing that art. That these ‘creators’ must surely form a normal distribution implies that there must be unprecedented numbers that are extremely skilled – including the Red Note Ensemble and their excellent conductor.

These things taken together may perhaps suggest an explanation as to why rural East Lothian might be capable of supporting an arts festival of its own. Could we be living in a new renaissance? Certainly there is more of every kind of art out there than there has ever been, and more people able to appreciate it. But perhaps more is less. Is so much art now being created that it is in danger of becoming a consumer product like any other…?

6 Replies to “a new renaissance?”