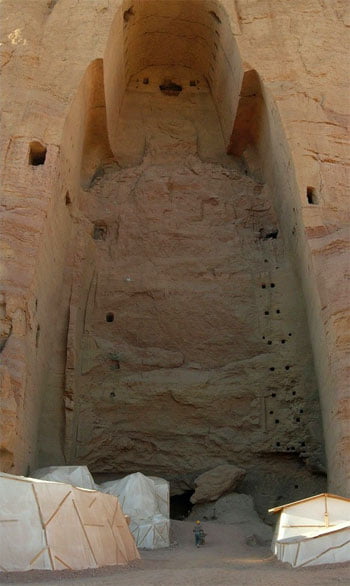 I was watching a TV program about Afghanistan where the presenter went to look upon the empty niche in Bamiyan that had once held a 55m high buddha carved from the sandstone cliff. This and other colossi were dynamited by the Taliban in 2001 because they considered them idols prohibited by the Koran. Being someone who has a profound reverence for history, I found this act of vandalism appalling.

There is serious talk about rebuilding the destroyed buddhas. What do such reconstructions of lost artefacts and monuments achieve? Surely, what makes such survivals valuable is that they have survived, and their authenticity; that those are the actual chisel marks made by people long ago. When we reconstruct something that has been lost – and there is a lot of this going on across the world – we are replacing something real with something that is fake.

Ultimately, everything physical that we make must disappear – that is the nature of things. There seems to me an unhealthy fetishism in feverishly trying to halt the passage of time. I am reminded of the somewhat creepy mummifying of Lenin. Everything has a life span, and then it should be allowed to die.

In the case of the buddhas in Bamiyan it seems to me that we are missing something quite profound. Why, after all, were these colossi constructed in the first place? No doubt it was an act of devotion. Also, a focus for contemplation. My next question is: what has actually been lost that matters? Consider how imperfect a representation of Buddhism the actual colossi have always been as things in themselves.

It seems to me that those empty niches contain far more potent representations of the buddha than the colossi ever were. What is left are buddha-shaped holes that have not lost their buddhas at all: we still see them there; we feel them there. These empty buddhas, that can never be destroyed (except perhaps by rebuilding them), are surely a more pure fulfilment of their purpose than wrought stone could ever be.

3 Replies to “the empty buddhas”