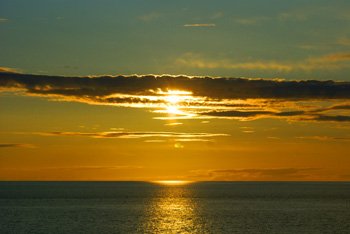 For most of human history our facsimiles of reality were very clearly man-made representations: no colour we could produce or use could compare in subtlety or vibrancy to those in nature; no fabric could approach the glossy texture of a rose petal; nothing, not even the finest acted mimicry, could hope to capture an animal in motion. Reality in all its splendour remained unassailably enthroned beyond our attempts to emulate it. This hierarchy has, more recently, begun to be eroded with, I feel, unfortunate consequences for each of us.

Film first captured moving images in a manner wholly artificial – jerky black and white and silent. Still, the excitement of this primitive capture of motion drew crowds. With the advent of sound, and the addition of colour, film became the first of our technologies that could plausibly represent an experience of reality. Mostly, what we have done with this technology is to give our fantasies the semblance of reality. More recently, flat screen technologies have taken over the accelerating process of making our dream representations ever more ‘real’. As each year passes the resolution of these screens (the pixels per inch), and the depth of colour (the number of bits assigned to a single pixel to encode colour) approach and will finally exceed that which our eyes are capable of discerning. Our dreams are coming closer to mimicking reality so completely that, in comparison, actual reality is beginning to seem less real.

Our inner notion of reality as expressed by facsimiles (pictures, carvings) has always been so compelling that, even when these were crude in the extreme, we could still fetishize them in preference over the far more luscious outer reality, coloured as it is in infinite gradations and displayed to us at an infinite resolution (in that however close you look at something, it has levels of detail beyond the acuity of our vision). How much more compelling then are the facsimiles we are beginning to produce? The one triumphant quality of reality that we could not deny – its irreproducibility by us – is under attack. Surely there will come a point when we will dethrone reality and set up before it an idol of our own making; our own dreams and aspirations clothed in all the seductive glory of reality. Nature dethroned, we shall instead worship the products of our minds. Turning a blind eye to reality, we shall worship ourselves.

2 Replies to “the retreat from reality”