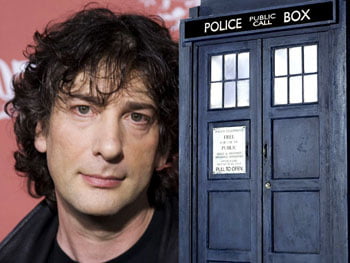 I probably watch Dr Who for the reason most people my age do – nostalgia. Bizarrely, Dr Who is one of my first memories of coming to the UK. I still viscerally remember (I WAS six) watching Patrick Troughton combatting the Cybermen and the Yetis – it somewhat set the tone for my impression of Britain *wide grin*. However, mostly, I find the experience less than inspiring. Gaiman’s episode is a rare exception.

What I most like is the way that he picks up on several key aspects of Dr Who that I have always found the most interesting. One is the Tardis itself. I’ve never understood why it is treated like a flying livingroom with the sole point of interest being what lies outside its front door, oh and the oft repeated – and, admittedly, the still amusing wonder of some poor schmuck who stumbles into the Tardis and discovers it to be “bigger on the inside than the outside”.

It has always struck me that the Tardis is of supreme fascination and, potentially, a world unto itself. Earlier episodes have explored this – going way back, I seem to remember the Tardis having a medieval belfry – so it’s not as if Gaiman has invented this, but boy did he run with it. The notion that the reason we’ve seen so many control rooms is because they’re effectively ‘software constructs’ tickled me with delight – and Gaiman riffed on this theme – with the Dr himself commenting that, sure, he’d changed the “desktop”, and the Tardis, in human form, declaring that she’d “archived” not only the versions of the control rooms the Dr knew about, but some that hadn’t yet come into being, at least from his point of view – a nice temporal play (and one among many). There is a lot more like this. Jettisoning rooms to increase speed, for example, continues the metaphor of Tardis as computable space. Once this central metaphor is declared, I don’t imagine it’s going to be easy to dispense with it. This exploration of the possibilities of such a conceit is what I feel all speculative writers should be about – stretching the limits of their inventions.

I could comment on various other aspects of this episode that I found masterly, but I am going to only comment on one more – I need to get back to my own work!! This is the conceit of putting the Tardis inside not only a human, but a woman at that (brilliantly acted, by the way, by Suranne Jones). This allows Gaiman to pluck a peach from the hoary tree of Dr Who, where he explores the relationship the Dr has with his Tardis on a human level. Effortlessly, it explains to us why the Dr is the eternal batchelor (perhaps torpedoing the River Song relationship?) – he isn’t! He is, like so many cerebrally motivated men, married to his work. Further, the interplay between Tardis as woman and the Dr explores wonderfully the relationship between man and machine – and even shows the machine as being the initiator and driving force in the relationship *grin*

The thing that struck me watching the episode, was that there had been all this nebulous blether about the ‘life force’ in the Tardis – certainly an interesting departure from earlier portrayals of the Tardis as soulless machine (at least from what I know, Mr and Mrs Whovian… I’m not pretending to be an expert!), but it was left to Gaiman to actually turn that life force into a human, and that, one in the middle of a love story. What a brilliant conceit all of this is – and yet another metaphor that I imagine future writers are going to be unable to ignore… (at least, I wouldn’t)

Finally, I can’t finish without mentioning the exhilarating chase in the tardis the Dr cobbles together from parts. Boffin as rough riding hero. That crazy careering flight with only a raw forcefield as an outer skin – what an utter delight!

So, Neil Gaiman has proved, to me at least, why his work is so well considered – and I thank him for entirely blowing me away with one of the few episodes of Dr Who that has wowed me since I was six years old.