hiding in the shoal… 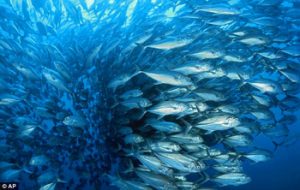 I have a friend who is most concerned about what he perceives to be his growing vulnerability to having his online activity spied on. He feels that increasingly his privacy is being compromised. His proposed solution is either to drop out or else to beef up his security somehow. I said to him that to put up a wall around you is, ironically, to draw the attention of the very forces you fear – for a wall is a lure for ‘them’ – and who believes that any wall could withstand their assault or siege?

It seems to me that, in the sea that is the Internet, the best strategy for remaining safe is simply to swim in the shoal. One lost among a multitude. In the constant flash of our movement lies our best protection against the predatory gaze…

(of course, there are those among us who choose to be more prominent, to blog for example, but that’s another issue… *grin*)