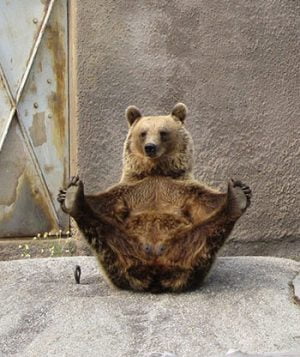 This picture is one of several taken by Meta Penca, a 29 year old web programmer from Slovenia, of Santra the bear doing her exercises at the Ahtari Zoo in Finland. Strangely, or not so strangely, this is exactly the same as the yoga posture Merudasana, Balancing Bear Posture (rather more prosaically also known as Upavishta Konasana, Seated Angle Posture.) Taking this name into account and comparing the two photographs, it seems obvious to me where the idea came from – it seems unlikely the bear is copying some human. 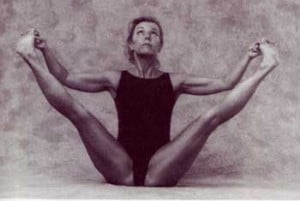 In the past humans learned a lot from animals. Yoga is filled with examples, then so is T’ai Chi (a part of one form is called White Crane Flaps Wings). Now you might say that the reason for this is because our forebears (*grin* no pun intended) were much closer to nature. However, I imagine that bears were no easier to watch then than they are now in our zoos, books or TV. I would suggest the real difference is that our forebears actually considered animals worth learning from. For them, the gap between us and animals was much smaller. Clearly by the time our civilizations began industrializing this gap had grown almost unbridgeable (some of this is down to religion, but that’s another issue).
If it had not it is hardly to be supposed that Darwin’s revelations about our origins would have caused quite so much consternation. In spite of now knowing that we are directly descended from apes (and they from other creatures all the way back to the first organism), we still have an ‘us and them’ attitude to our fellow animals. That we no longer feel we have anything to learn from them is an example of our hubris, and is not just our loss, but also theirs…
tags: ancestors, animals, culture, darwin, foucault, heidegger, hubris, speciesism, t'ai chi, yoga