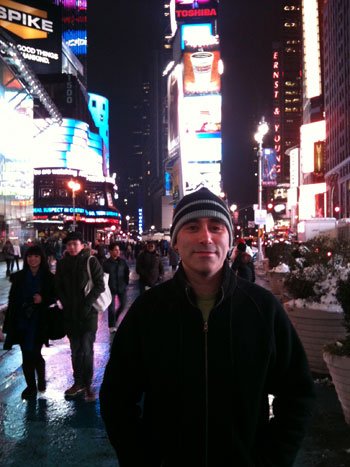 Something I’ve rabbited on about before is how the world is homogenising – the more I travel, the more it seems to me that everywhere is becoming the same. If this is even true for Sri Lanka, then how much more so is it for travelling between the UK and New York?

But before I go into that (I think this is going to become quite a ramble, but hopefully you will forgive me, now that I am becoming so very aged *grin*), I would like to lay before you a rather brilliant observation made by the peerless historian Arnold Toynbee that seems to explain why globalization naturally leads to cultural homogenisation.

Toynbee points out that this has happened before: in the Neolithic a flint spear point in western Europe would be indistinguishable from one being made on the same day in China. This is because, at that time, whatever innovations in technique these spear points might incorporate, the rate of innovation in technology (and culture) was far slower than the rate at which news of it could be spread. Once this rate of innovation started speeding up to be faster than the rate of spread, then regional cultures started emerging – the innovations piling up locally faster than they could spread to other cultures. Thus China became very different from Europe. However, in the past hundred years or so the rate of spread has dramatically increased – even though the rate of innovation has also sped up. With the internet anything innovated anywhere can quickly become known to everyone everywhere. So, welcome to the New Neolithic! The Cyberlithic where our stone tools now consist of silicon chips *grin*)

New York is of course remarkable – though perhaps as much for its associations as for what it actually is. It has been for so long ‘the’ world city that we all of us think we know it. There are people everywhere who probably have seen more of New York (through Hollywood’s charmed eyes) than they have the capital of their own country.

I had never been there before, and so there was that strange shock of seeing in reality that which I had seen in so many other virtual ways. The relationship of one thing to another, the geography, the relative and absolute scales of things – these were all different from those I had arrived with in my head.

I did all the touristy things – it seems only polite on a first visit. It was particularly cold, more so even than in Scotland! so I’m not entirely sure I saw the city as it is typically. New York is impressive – how could it not be? Wonderfully cosmopolitan – though perhaps not more so than London with which I am familiar. It has the same range of treasure houses – the Metropolitan Museum, for example, and the glorious (and vainglorious) examples of architecture that wealth adorns cities with. For some reason I kept on thinking that this would be how Babylon might have appeared to an ancient visitor – but then Babylon is perhaps much on my mind. Perhaps what most distinguished it for me from a European city is some of its infrastructure: Paris would be embarrassed to have her bowels riddled by the New York subway. Though simply functional it lacks some of the civic care and elegance that would be lavished on it by a European capital. One surprise: I had expected natives to be rude – that’s the cliché – but they weren’t. In fact the New Yorkers I encountered were the friendliest people I have come across in any Western city.

It was my birthday that led me on this winter visit to New York. A 50th should probably be made a fuss of, but I couldn’t bear having anything organized at home. Too much pressure. Besides, I’m really rather shy about attention – not so attention for my work!! *grin* In one way 50 is just an arbitrary number – if we counted in base 12, then the significant birthdays would be 12, 24, 36, 48, 60… and I would still be in my early 40s *grin* Not that I am trying to deny that there is something significant in these time markers. Jung had an image of life as being like a single passage of the sun through the sky. We are born and then, for the first half of our lives, we ascend, growing ever brighter, seeing ever further. When we reach our midday that is as high as we go, as bright. Thereafter, we begin the slow fading to our sunset. No wonder then that so many of us have ‘mid-life’ crises. Clearly, psychically, something profound happens to us as we near the midday of our lives, and once we become aware of our inevitable decline. Jung maintained that the morning of our lives, though filled with struggle, is relatively straightforward. It is the afternoon that it is difficult to deal with. And the secret of a good life is how we handle that. I passed my midday a while back (however much our lifespans are lengthening) but I am still coming to terms with being in the afternoon of my life.

Showering before going to catch my flight home, I began thinking of the life I was returning to. It occurred to me how strange it was that I should be thinking nothing of the crossing of the Atlantic. This vast ocean that for so long kept the Old and New Worlds apart, the crossing of which had profound effects that we still are living through. Images crossed my mind of all the people to whom that crossing was one way – and a vast, frightening and dangerous undertaking. That I had mentally ‘skipped over it’ shows again just how virtual our world has become. In the West we so rarely exit the envelope of human reality that often the ‘actual’ world hardly seems to be there at all. And even as New York seemed to me not very different from London… soon it will not seem so different to Cairo, Nairobi, Shanghai… And yet, even if I rode the virtual teleport of my aeroplane back home (admittedly a rather tedious teleport lasting 6 hours), this did not mean that below me there was not thousands of kilometres of cold heaving ocean.