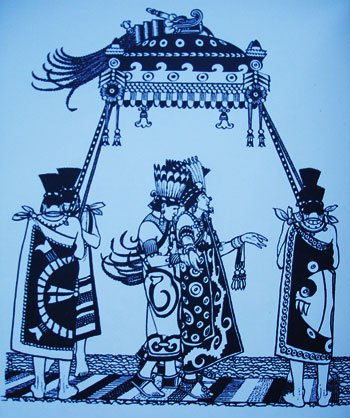 When Cortez first met Moctezuma, the emperor of the Aztecs advanced towards him half-carried by a couple of his relatives, as if he were some fragile invalid. This affectation was one that Moctezuma could allow himself, lord as he was of the conquerors of Central America that, to its inhabitants, was the navel of the Earth and the greater and best part of the world. No doubt this kind of posturing was copied by lesser lords who aspired to the power and sophistication of their masters.

Wealthy Chinese grew their finger nails to such lengths that they had to protect them with jewelled sheaths. Such elevated personages were thus rendered incapable of even dressing themselves. This of course was the point – for it showed that they were above the need to use their hands for anything practical. Indeed, in China, it was long a tradition that men of august rank should become increasingly effeminate as a consequence and sign of their refinement. Even Mao, a son of peasants, cultivated this tradition.

There are countless other examples of elites becoming ever more mannered – imagine the courts of France, with their bouffant white powdered wigs, their extravagant lace cuffs, their beribboned shoes, their rouged cheeks and beauty spots. What I find interesting is that these affectations are only sustainable as long as the society that contains them is a dominant one. The moment that it ceases to be so, the once admired and copied manners become if anything an object of contempt and even mockery. The warrior who is feared can be a lover of men – the Spartans, the samurai – but once he is defeated, such habits become despised. If the Japanese had won the Second World War, perhaps their men would be less likely to wear Western suits. If China begins to dominate the 21st century, it seems to me likely that it will be their manners that the rest of the world will emulate, not those of the Americans. So it is that we have perhaps not come as far from aping the alpha male as we might like to think we have.