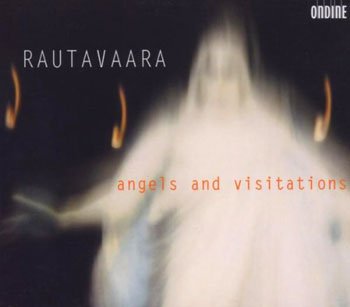 When I am ‘actually’ writing I rarely listen to music, finding that its rhythms can interfere with those of the prose I am composing. However, when I am working on planning I often have something on in the background. I use playlists to accompany general ‘thinking’ – Harold Budd, Brian Eno, etc – and much baroque – Bach, Rameau, Couperin, Byrd etc. During more intense ‘thinking’ I might listen to Tangerine Dream, Piazzolla, Varese, Philip Glass.

When more focused on actual scenes, I have developed a habit of assembling pieces into a ‘soundtrack’: sometimes music that represents a specific theme or character in a process somewhat analogous to Wagner’s leitmotifs; or that I use to accompany a particular chapter. It is one of these last that I would like to present here.

Angels and Visitations is by the Finnish composer Einojuhani Rautavaara, one of several modern composers that I have found myself gravitating towards more and more as I have grown older. He creates soundscapes that I find exquisitely atmospheric and that mesh fruitfully with the images in my mind.

I listen to all my music from hard disks and have been unable to find the original CD with its booklet, however, what I remember (perhaps erroneously) is that Rautavaara wrote this piece as a reaction to a time when he was lying ill and perceived an angel to be standing at the foot of his bed; a being that utterly terrified him. This story found strange resonance with the Masters in my Stone Dance trilogy who consider themselves angels and are a terror to those they rule. Angels and Visitations formed part of a particular constellation of themes, but became the dominant soundtrack for the chapter Blood Gate in my book The Third God in which my trilogy reaches a final crisis of the utmost violence and atrocity.

Angels and Visitations is in itself a drama that it seems to me could only have been written post Freud. For beneath its Hieronymous Bosch surface (The Garden of Earthly Delights perhaps?) I sense there moves the leviathan of what Jung would call our collective unconscious, so that this piece does with sound what I feel works of fantasy seek to do with words.

(I have included a link above (and here) to Angels and Visitations because it seems to me rather pointless to discuss a piece of music without it being possible to listen to it. I realize that this may be seen as breaching copyright, however, I do this with the hope that it may cause people to go out and buy some Rautuvaara and thus that what I am actually doing is promoting his work)

6 Replies to “angels and visitations”