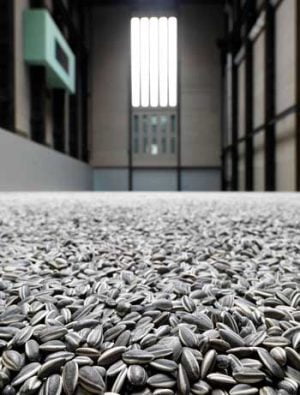 Ai Weiwei’s Sunflower Seeds is currently showing at Tate Modern. A Chinese artist who has suffered severely for being politically outspoken, and who was the artistic consultant on the glorious Bird’s Nest Stadium at the recent Olympic Games, Ai Weiwei has produced a work that says much about China today and in the past. Consisting of 100 million sunflower seeds handmade from porcelain, fired at a high temperature, handpainted, then fired again. According to him:

Conceptually (I’ve not actually seen it), I read in it several layers of meaning.

Porcelain, an industrial and artistic product with which China supplied the rest of the world, links China’s past with today when she has become the workshop of the world.

I am reminded of the Terracotta Army – another example of Chinese labour being lavished to produce something beyond the capacity of almost any other people (excepting perhaps the ancient Egyptians). These are at the same time displays of what humans can achieve if bent to a single goal, but also the dehumanization involved: when we look at the Terracotta Army we are thinking of the brilliant but megalomaniacal First Emperor. Similarly with another of his megaworks – the Great Wall. With the rise of Mao, once again it is an individual who looks out at us, while his people, identical and beneath notice, lie beneath his feet.