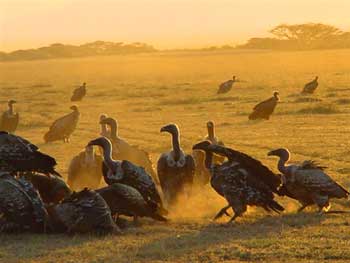 I was drawn to this piece by the welcome news that the terrible disease rinderpest has been eradicated. However, as I read it I became irritated when I came to this innocuous enough paragraph:

As the virus spread, it left vast numbers of dead livestock in its wake, and communities without meat and milk. The loss of the animals, which were used to plough the land, crippled farming and led to widepsread starvation.

My irritation stemmed from knowing something about these “communities” that starved. In one of those consequences of Western imperialism that is still being conveniently forgotten, rinderpest, introduced by Europeans, devastated the pastoral cultures of East Africa. What we now think of as the ‘wild’ African plains may actually be the legacy of human action. The Serengetti, no less manmade than the rolling arable landscapes of England. The disaster that rinderpest spread across these parts of Africa led to large swathes of the human populations succumbing to famine. One Masai elder later recalled of the dead:

So many and so close together that the vultures had forgotten how to fly.

So that when Europeans arrived they found the survivors of the once proud and rich cultures reduced to beggary; people who, needing ‘civilized’, became part of the “White man’s burden”.

The consequences of this disaster live with us still and, in the West, we still persist in seeing these parts of the world as we have always chosen to see them – ignoring the truth even though it’s there in plain view. The Guardian article I link to above does not lie directly, as was once common, but the omission covered by that bland paragraph I quote seems to me bad enough.