our perception of time 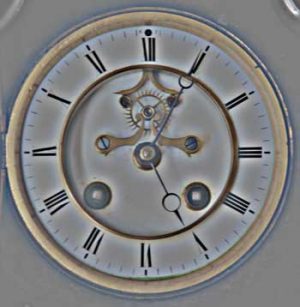 life measured by thought and not the senses...

I have just come back from walking my dog to hear someone talking on the radio about a theory he has of the perception of time that sounds essentially the same as one that I have held for a long time. So I thought I may as well put down my thoughts for the record.

Some years back I came back from shopping and realized that I had been there and back and could barely recall anything that had happened. It was almost as if I had not gone shopping at all – though I had the full bags to prove it… This then provoked in me an insight that gave me an answer as to why it was that time seemed to move faster the older I became.

People are always saying that time seemed to move so much slower when they were children – that the summer holidays seemed to last for ever. It seems to me that the reason for this is simply that, when we are children, we live profoundly ‘in’ our senses – that is, we are constantly monitoring sensory input. An extreme example of this would be a baby learning to take her first steps. The crossing from one side of the room to the other is necessarily a major undertaking. As a consequence, the experience is overwhelming – every totter, every regaining of balance, every step forward is experienced with exquisite awareness. Now, when you or I cross a room, we are no longer aware of our balance, of each footfall and the reason for this is that we’ve automated it. I remember my first driving lessons as being rather analogous to the child tottering. With practice, the mechanical processes of driving a car, that had once left me in a sweat of concentration, slipped into my subconscious, so that now I can drive barely aware that I am doing so.

As we age, we gradually automate everything, until we reach a state where we can negotiate almost our entire lives on ‘automatic’. Though our brain is still processing sensory input, our conscious mind is not. And, when consciousness is untethered to the senses, then we lose that childlike time perception. Apart from our body clocks (that operate in a different way), our perception of time is entirely given to us by what is happening outside us. If we stop paying attention to that, then time becomes entirely fluid, becoming the slave of whatever it is we are paying attention to: if something boring, time drags – if fascinating, it gallops.

So the answer to why time speeds up as we age is that we are progressively disengaging from the real world, the world of our senses, and instead choosing to spend our time in virtual worlds that reside entirely in our heads. Worse, we most of us deliberately annihilate time. How many of us do not sit at our desks longing for the weekend to come? – and by so doing, we compress the weekdays. Or we spend time looking forward to a holiday – and thus compress the weeks to that time…Interestingly, a proof of what I’m saying seems to me to be provided beautifully by holidays – especially those challenging ones where we go to a foreign country. There, our ‘automations’ so often don’t work. Consequently, we are forced back into our senses as we try and ‘make sense’ of things… Thus, on such holidays, a week appears to be a month. Holidays seem to expand time, though, of course, it is not the holiday that is expanded, but the rest of our lives.

So, the rate at which time moves for you is up to you. If while you are eating your cornflakes in the morning you actually pay attention to their taste and texture in your mouth, then your breakfast, rather than being a null-time event, will stretch to occupy a sizable period – an eternity even *grin* Of course, when I got to this point, I realized that this is what Buddhists and yogis have been saying for centuries – all that ‘listening to the breath’ – for, after all, what is listening to your breath other than tuning into the ‘real’ tick-tock of your life, rather than paying attention to that mechanical tyrant on the wall.?

7 thoughts on “our perception of time”