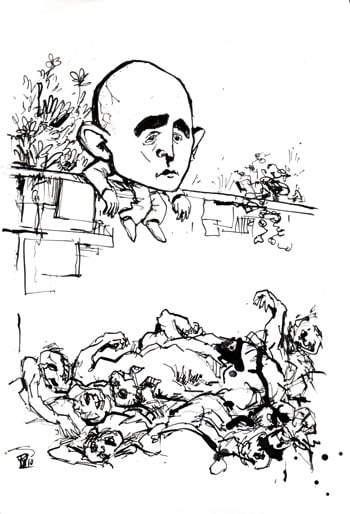 This is a picture that my friend Rem sent to me to celebrate the launch of The Third God yesterday… I thought I’d share it with you since it not only amused me, but also intrigued me… I had some notions what it might mean – especially gazing at the pile of rather unfortunate looking corpses on the ground – I thought that it was all the king’s horses and all the king’s men that were supposed to put humpty together again… but here they seem to be the ones that are ‘broken’… Anyway, this is what Rem said:

it’s about the interview… Not letting people be too
comfortable behind their walls; you sitting on the wall, seeing the horror outside. Sartlar, perhaps, WW1, Rwanda… And there’s the ‘healing’ aspect of it too, so hence also the Humpty Dumpty (‘putting Humpty Dumpty together again’) reference. There’s some wee hairline cracks, because the healing may not be complete.