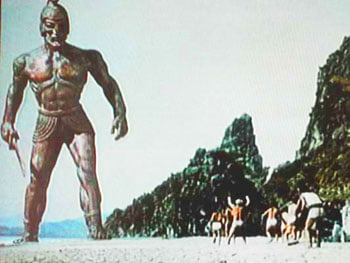 From ancient times man has dreamed of being able to give life to one of his creations. In Greek mythology, Hephaestus (Daedalus as well, I think?) constructed ‘robots’ (Talos, for example, Hephaestus’ gigantic bronze warrior of “Jason and the Argonauts” fame). It was not understood then how intelligence was going to be far more difficult to produce artificially than self-powered movement.

When I was at school, there was much talk about chess playing computers and how, once we had a device that could play chess brilliantly, then we would have artificial intelligence (AI). Of course, Kasparov, arguably the greatest human player of chess who ever lived, was beaten by IBM’s Deep Blue, but no one pretended it was possible to have a sensible conversation with IBM’s prodigy. It turned out, rather unsurprisingly in retrospect, that though for us it is difficult to play chess, for a computer with a fast enough processor it is a cinch. (Incidentally, as far as I’m aware, computers have not been able to beat master players of Go… and this only goes to show that, to play well, Go requires more of that elusive human intelligence, than does chess… and this again, to those who have played both, is not surprising.)

What was surprising was to discover that it was the things we find easy (recognizing our mother from different angles, under different lighting conditions, even if she’s wearing a disguise) that computers find almost impossible. Of course, the reason this was surprising was because we didn’t actually know what constitutes intelligence. We still don’t. If we did, then we would already have made a device mimicking it. Marvin Minsky has been making predictions for decades that, within a few years, there would be AIs around to whom we would appear imbeciles… Clearly, the man suffers from a delusion that he knows what intelligence is. He’s not alone.

Personally, though like so many others I have been fascinated by the idea of AIs most of my life, perhaps we should be careful what we wish for. No doubt a ‘real’ AI would be able to do everything we do INDEFATIGABLY – and there’s the rub. An AI could do everything we can do, but without needing to rest, without having moods, self-doubt. If we could make it, it could make a version of itself… and if it could do so, such that its creation was even infinitesimally more capable than it was, well, we would have started a new evolutionary line that would quickly out-evolve us… and then Dr Minsky would finally be right…

the seed of this rant