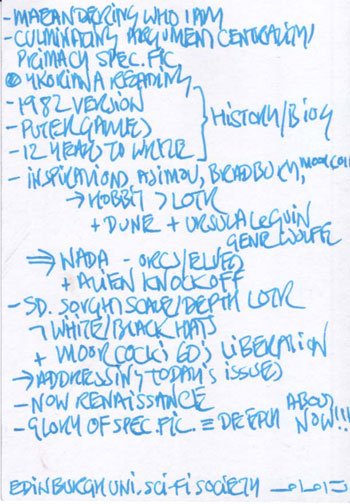 It was only when I arrived outside the venue for this event that it occurred to me that I should have announced it here, on my blog. Not entirely sure why I didn’t. Apologies if you might have wanted to be there but weren’t.

This talk was specifically for freshers (students coming to university for the first time) with a view of encouraging them to join the university’s Science Fiction and Fantasy Society. It was well attended. I read some stuff from the various Stone Dance books and talked a little about who I was and how I had got into writing.

I talked about Tolkien and Moorcock: how the former inspired me by his method and approach; how the latter reinforced my own desires to escape from the tyranny exercised by ‘feudal Europe’ over fantasy. I talked about how dated Tolkien’s ‘black hat/ white hat’ characterisations can be – that though this polarized view of reality might perhaps be natural to people living through the two World Wars and who were still deeply influenced by Christian dualism, but that today I felt it necessary to take a more subtle, nuanced position. I touched on Dune, Ursula le Guin, Ray Bradbury and Gene Wolf. Then I moved to discussing the renaissance that seems to be occurring in speculative fiction generally.

Finally I launched into backing up a claim that speculative fiction could be seen to at the centre of our culture – and rightly so… My basic argument went like this. It seems to me that sci-fi explores possible evolutions of our cultural envelope in a cognitive projection from where we are now, on into the future… Fantasy on the other hand explores the inner world of our psyche. I talked here a bit about Jung’s archetypes and his notion of the collective unconsciousness – the deployment of which makes a story about everyone, and no one in particular. I pointed out that, in some ways, these two categories are pointless as there is much fantasy that appears to be sci-fi (Star Wars being an example) and sci-fi that may appear to be fantasy (the Stone Dance being an example…), that what really mattered was that the reader lay at the heart of these categories… perhaps even squeezed between their boundary as a fluid mix of her/his internal and external worlds… her/his present between the future and the familial past… I then railed a little at the ‘speculative’ ghetto… and pointed out the rather interesting fact that the only area in which fantasy/sci-fi is not a second class citizen is in children’s books: Harry Potter, Pullman, for example… is this not, perhaps, suggestive?: that in a world that is changing faster all the time, those who remain childlike longer – curious, learning, adapting – will cope the best… Thus it seemed to me that it is speculative fiction that best addresses the issues of the ‘now’ and can provide insight, guidance and, even, consolation.

Was sent this review by the legendary critic David Langford last week, but couldn’t show it to you until I got permission. Needless to say, as the first review (that I know about), I am chuffed. 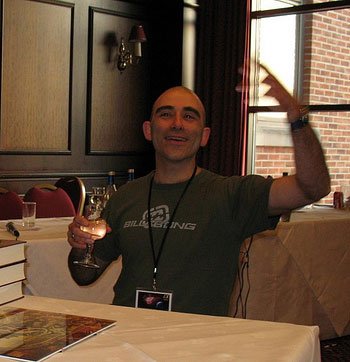 Eastercon was delightful, challenging and exhausting. I moderated panels for the first time and found that I really rather enjoyed it. I appeared on various others and, it turns out, being rather new to this convention malarkey, I had volunteered for more than perhaps I should have done… There’s a lot of drinking goes on at these things, and every night I was up carousing into the early hours – only to find that, bleary eyed, I had to get to the convention hotel early for yet another panel… This meant that I was unable to attend as many of the talks and panels that I would have liked. I did much enjoy watching Tim Powers being interviewed. Another highlight was a screening of a 1912 silent version of Frankenstein – accompanied by a wonderful live piano improvisation.

But what really makes a convention so enjoyable is the people. Imagine being locked into the Overlook Hotel with 800 souls whose interests intersect yours – for days! Everywhere gaggles discussing anything that you can (and that you can’t) imagine… I met a lot of fascinating people, some who I knew, others who I did not and I made some new friends. It was a particular pleasure to hang out with Gary Lloyd, and with Liam Sharp and his lovely wife, Chris. A prominent comicbook artist, Liam is branching out into books, the first of which, God Killers, is an amazing debut – vibrantly written, raw, visceral – with something of the brooding atomsphere of Beowulf and the earthiness of Robert E. Howard. What’s worse, there are some scenes in there I wish I had thought of!! ;O)

My friend Vince Docherty gave me a lovely intro at the launch of The Third God. I don’t do a lot of public speaking and so was quite nervous. I intended to speak for 4 minutes, but ended up talking for nearer 45 – the spirit of my books possessed me.

On my way home I did a radio interview for the BBC. After days of endless, unbounded conversation, it was hard to compress my chat down to such a minimal medium.

The week after, I went to London to hang out at various exhibitions, to see plays, to hook up with friends. I also had a meeting with my editor Simon Taylor. Over lunch we discussed what I might write next. We both fixed on one project and I have been working on it ever since.

Today I took some time off working on this website to go and give a ‘language class’ to some 8 year olds. I read them the first paragraph from The Chosen. Unsurprisingly, they were intrigued by the ‘childgatherers’. We discussed choosing verbs and alliteration. Next I read them the first paragraph of The Third God. They wrote stories based on this, speculating on how Ykoriana might have lost her eyes and what she may have done to deserve this. What they came back with was delightful. Some saw her as a victim, others as evil and having stolen her ruby eyes from the Wise. Fairytales riffing on the themes in that first paragraph, reflecting all kinds of child-logic, yet resonating well enough. I’m not sure why I should feel surprised. A fascinating experience.

Often it has seemed to me that rather than the Stone Dance being a trilogy it would be better described as a triptych – it isn’t three works, but rather a single ‘picture’ in three parts. This feeling has found its way into the structure of the books.

Here I would like to comment on the first chapter of both The Standing Dead and The Third God. These alone do not stick to the close 3rd person perspective used elsewhere in the Stone Dance. In this respect they can be considered as the hinges on my triptych – hinges that hold together the three ‘panels’ of the books. (Pushing the analogy near breaking point: the Song to the Earth, the poem appearing at the beginning of The Chosen, could be seen to be the clasp that opens and closes the whole work.)

This is all a rather elaborate way of saying that you can read the first chapter of The Third God as an entity somewhat separate from the rest of the story – and as a link between The Standing Dead and The Third God proper, the action continues in the second chapter.