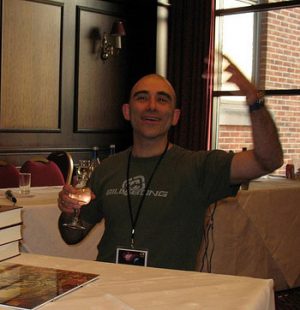 slightly crazed at his launch, clutches the elixir of life

Eastercon was delightful, challenging and exhausting. I moderated panels for the first time and found that I really rather enjoyed it. I appeared on various others and, it turns out, being rather new to this convention malarkey, I had volunteered for more than perhaps I should have done… There’s a lot of drinking goes on at these things, and every night I was up carousing into the early hours – only to find that, bleary eyed, I had to get to the convention hotel early for yet another panel… This meant that I was unable to attend as many of the talks and panels that I would have liked. I did much enjoy watching Tim Powers being interviewed. Another highlight was a screening of a 1912 silent version of Frankenstein – accompanied by a wonderful live piano improvisation.

But what really makes a convention so enjoyable is the people. Imagine being locked into the Overlook Hotel with 800 souls whose interests intersect yours – for days! Everywhere gaggles discussing anything that you can (and that you can’t) imagine… I met a lot of fascinating people, some who I knew, others who I did not and I made some new friends. It was a particular pleasure to hang out with Gary Lloyd, and with Liam Sharp and his lovely wife, Chris. A prominent comicbook artist, Liam is branching out into books, the first of which, God Killers, is an amazing debut – vibrantly written, raw, visceral – with something of the brooding atomsphere of Beowulf and the earthiness of Robert E. Howard. What’s worse, there are some scenes in there I wish I had thought of!! ;O)

My friend Vince Docherty gave me a lovely intro at the launch of The Third God. I don’t do a lot of public speaking and so was quite nervous. I intended to speak for 4 minutes, but ended up talking for nearer 45 – the spirit of my books possessed me.

On my way home I did a radio interview for the BBC. After days of endless, unbounded conversation, it was hard to compress my chat down to such a minimal medium.

The week after, I went to London to hang out at various exhibitions, to see plays, to hook up with friends. I also had a meeting with my editor Simon Taylor. Over lunch we discussed what I might write next. We both fixed on one project and I have been working on it ever since.