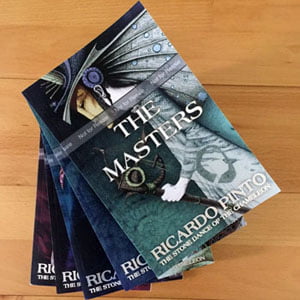 I have been hard at work on the Second Edition of the Stone Dance—it feels like an endless task but I’m getting there. Proofs of the first five volumes exist, and here’s a photo to prove it! :O). The sixth volume is almost at proof stage, but I put it aside so I can get my head around ‘marketing’.

The first volume is ready to go, and a proof of the second volume is out for proofreading. I hope to publish the first volume in a few weeks. The second will follow perhaps a couple of weeks after that, and I will release the rest, one a month, until all seven are out. There will be ebook versions of each volume.