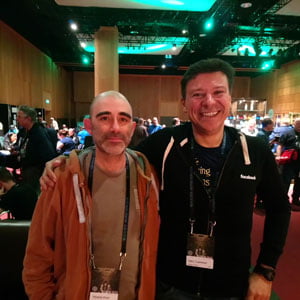 Dublin was the first Worldcon I’ve attended—in truth I attend very few of these conventions. Given how much fun I had, I’m now wondering whether I shouldn’t attend them more frequently. 4000 people were supposed to attend, but 5500 came (6000 by some reckonings). A second building had to be hired at the last minute to accommodate the multitudes. We all discovered, quite early, that if you didn’t start queueing for an event early enough, you wouldn’t get in. There was a vast number of fascinating talks and discussions on every topic imaginable—and some not imaginable—and a wonderful concert, in a concert hall on top of the conference centre, with a full orchestra, that included a premier of some arias from a wonderful new opera with dance, composed and choreographed by my friends Gary Lloyd and Bettina Carpi, respectively, and based on Mary and Bryan Talbot’s graphic novel, Dotter of Her Father’s Eyes.

My old chum, Alan Campbell, accompanied me on this expedition—he had two trilogies published some years back with some success, but has been writing film scripts and part of my agenda was to encourage him to write a few more books.

I met a lot of old friends, and made new ones. I met some of my fans—which is always a delight.

People who have been going to conventions since before the Flood tell me that they are not what they used to be. I would be interested to know if you attend these conventions and, if so, what do you get out of them?