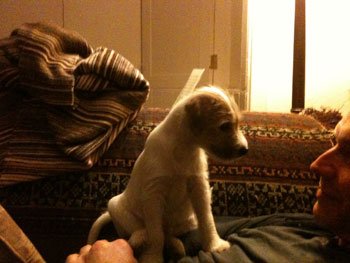 I have got a new dog. We’ve been meaning to get a dog since our previous one, Ninja (named for reasons of being a tearaway when a pup) died. She only came to us when she was 13 – an old lady in dog terms. She died just over a year ago at 15. Early in those two years we grew to love her, and we mourned her when she was gone. We have now adopted another Parsons Russell terrier – this one an 8 week old pup we’ve named Toby.

Toby has only been with us since Saturday night, but it already feels as if he’s been part of our lives for ever. Even though he has turned our lives upside down, and has been keeping everyone from sleeping properly with his howling for his mum, he is, of course, an utter delight.

It amazes me that evolution has managed to so shape baby animals that they are incredibly appealing even across species. I wonder if anyone has done a scientific study of ‘cute’.