It was hell getting to the Forúm Fantástico. I flew from Edinburgh at the unearthly hour of 6am… I’ve NO idea why it is necessary to be there 2 hours before the flight, and I wasn’t, but still! I loathe flying – it is by far one of the most unfortunate modes of transport devised by the human species. All that queueing, waiting, undressing, unpacking, dressing, packing, waiting, going here, waiting, going there, waiting, being sardined into an aluminium tube then squeezed out the other end. Could anything more ludicrous be conceived than a metal box hurtling through the air jammed full of hassled, short-tempered apes?! I would’ve rather gone by camel. 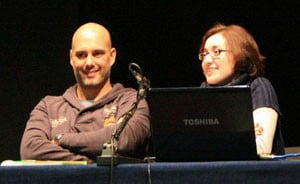 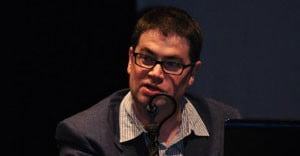 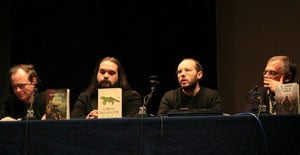 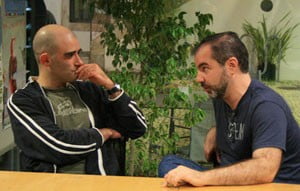 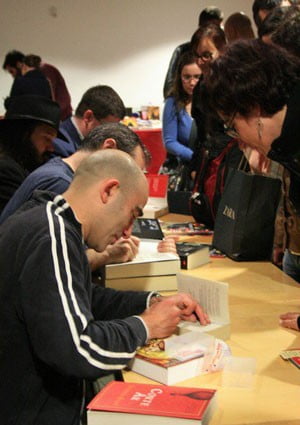 Amsterdam was suffering a gale. When the pilot managed a hair-raising landing, we all spontaneously burst into clapping to thank him for having saved our lives. Of course my connecting flight was also delayed. By the time I arrived at my hotel in Lisbon, I had been travelling for nearly 13 hours. It took me less time to get to Cambodia!

Hours late, I got a taxi to the convention. The driver hadn’t a clue where that was, and we wandered utterly lost before Rogério Ribeiro came to my rescue – not for the last time. The poor man organized the whole thing on his own (with some help from Safaa Dib) from Pisa!?

Eventually, a whole load of us went out for dinner. I had a real laugh with Daniel Cardoso, Inês Rôlo and Sofia Correia, chums I knew from facebook…

After yet again not enough sleep, I opened the morning’s proceedings with a talk on ‘World Building’… from which come all the gesticulations above. I did this in English because it would have been unfair to inflict such a ‘technical’ talk on my audience in my ropey Portuguese. (I found out later that Raquel Garrido had filmed the whole thing and you can find it here (part 1, 2, 3, 4, 5, 6). This was followed by a talk on ‘Technology and Atmosphere’ by Stephen Hunt and another on ‘Characters and Characterization’ by Peter V. Brett. I later had interesting chats with both of them.

When I got back from lunch with my editor Raquel Dutra, I watched a panel on ‘Fantastic Lisbon’ with four Portuguese authors who, with delightful fluency and wit, opened my eyes to a world of Portuguese fantasy and sci-fi I simply hadn’t realized existed. It’s easy to fall into believing that speculative fiction is entirely an English language affair.

After David Soares launched a book, I did an interview with Rogério in my less than sparkling Portuguese. Daniel produced a recording of this and I will try and put it online once I have it.

Stephen and Peter did their interviews. Then we all did a signing.

Then it was out for dinner (with among others Guadalupe Cabral and Inês Botelho), bed and the flight home the next morning.

Though quite a small convention, Fórum Fantástico was beautifully located, smoothly organized with a great mix of warm and bright people. As speculative fiction increases in popularity in Portugal, I am told that the Forum will grow bigger. I hope so, it deserves to be even more of a gathering than it already is.